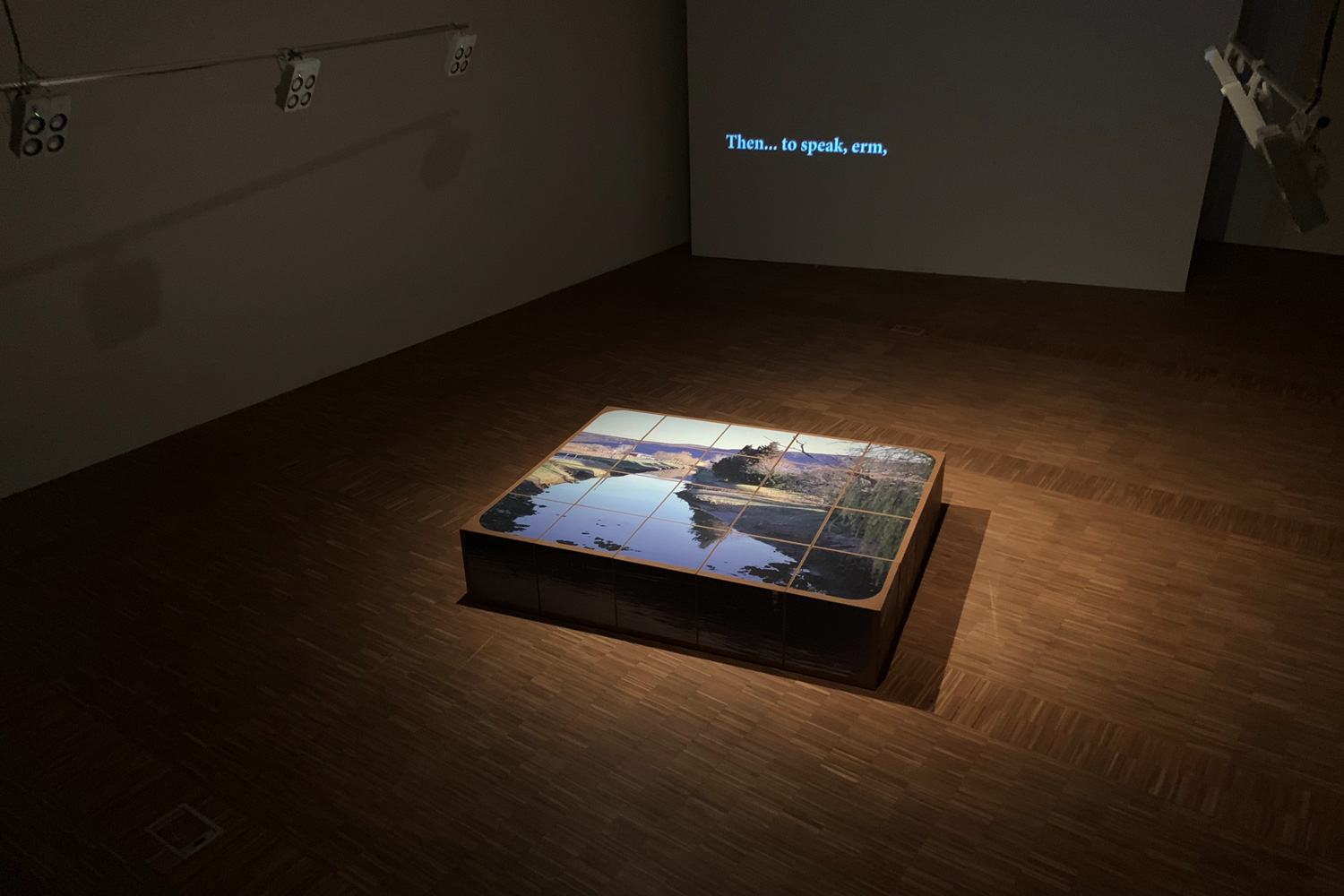 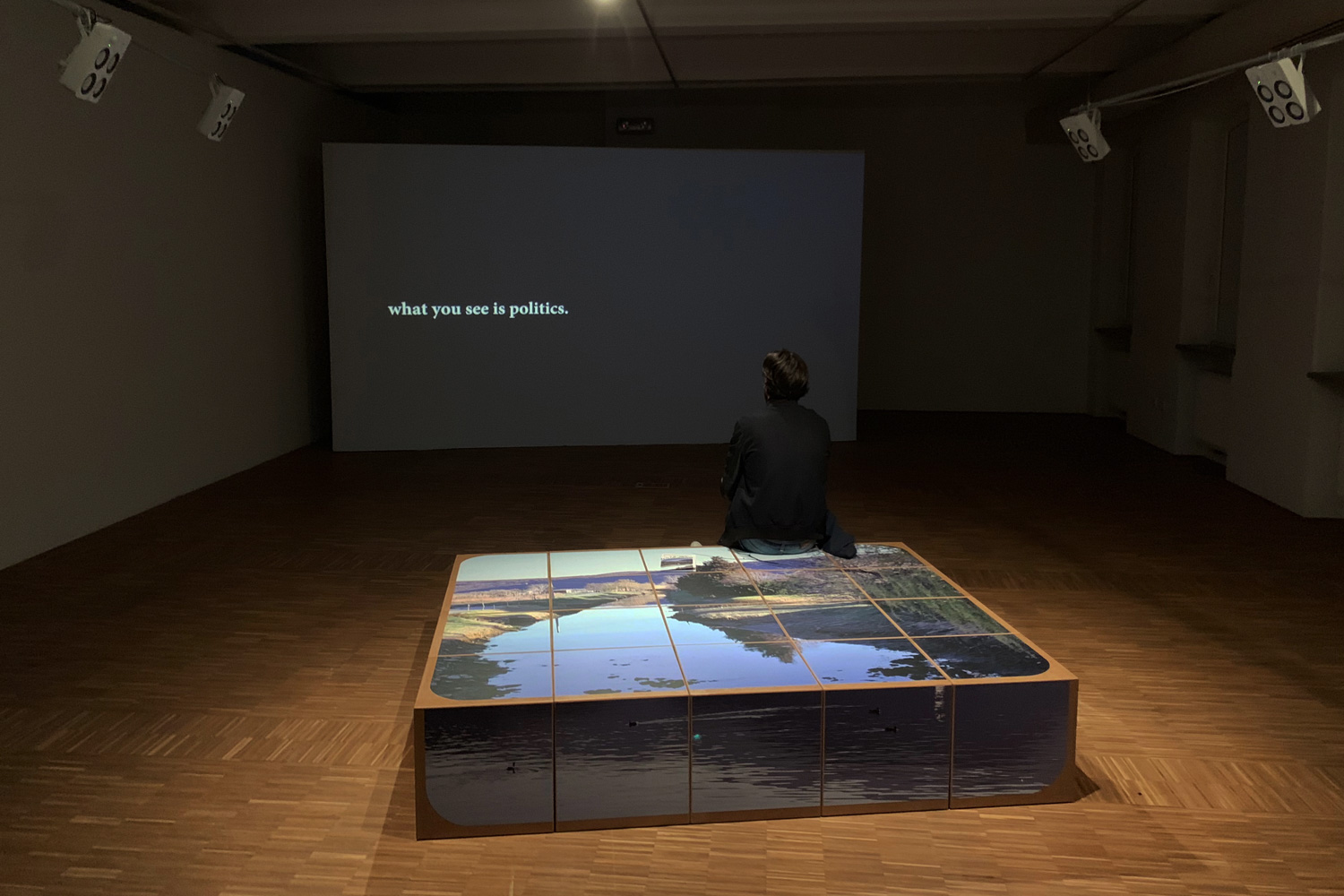 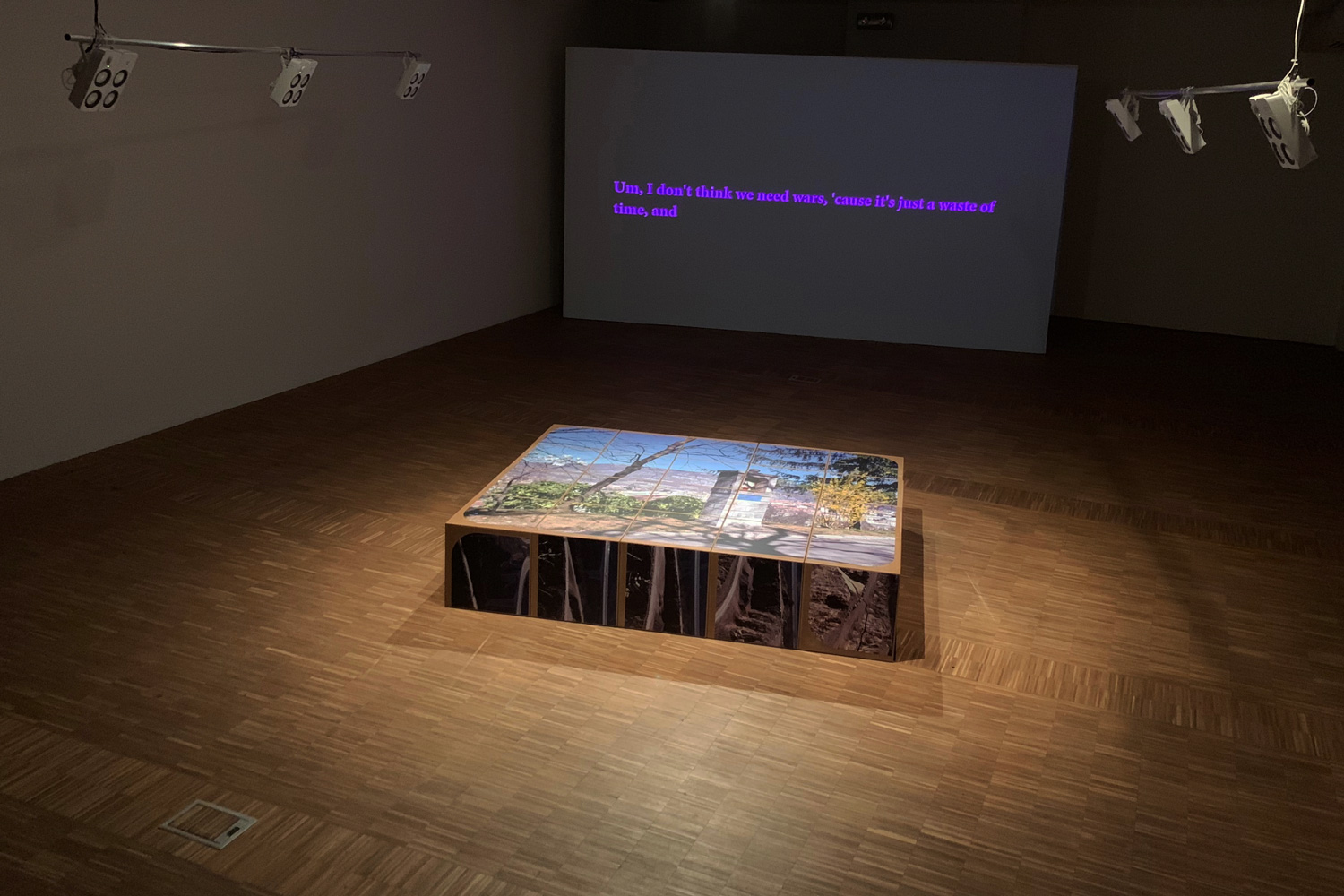 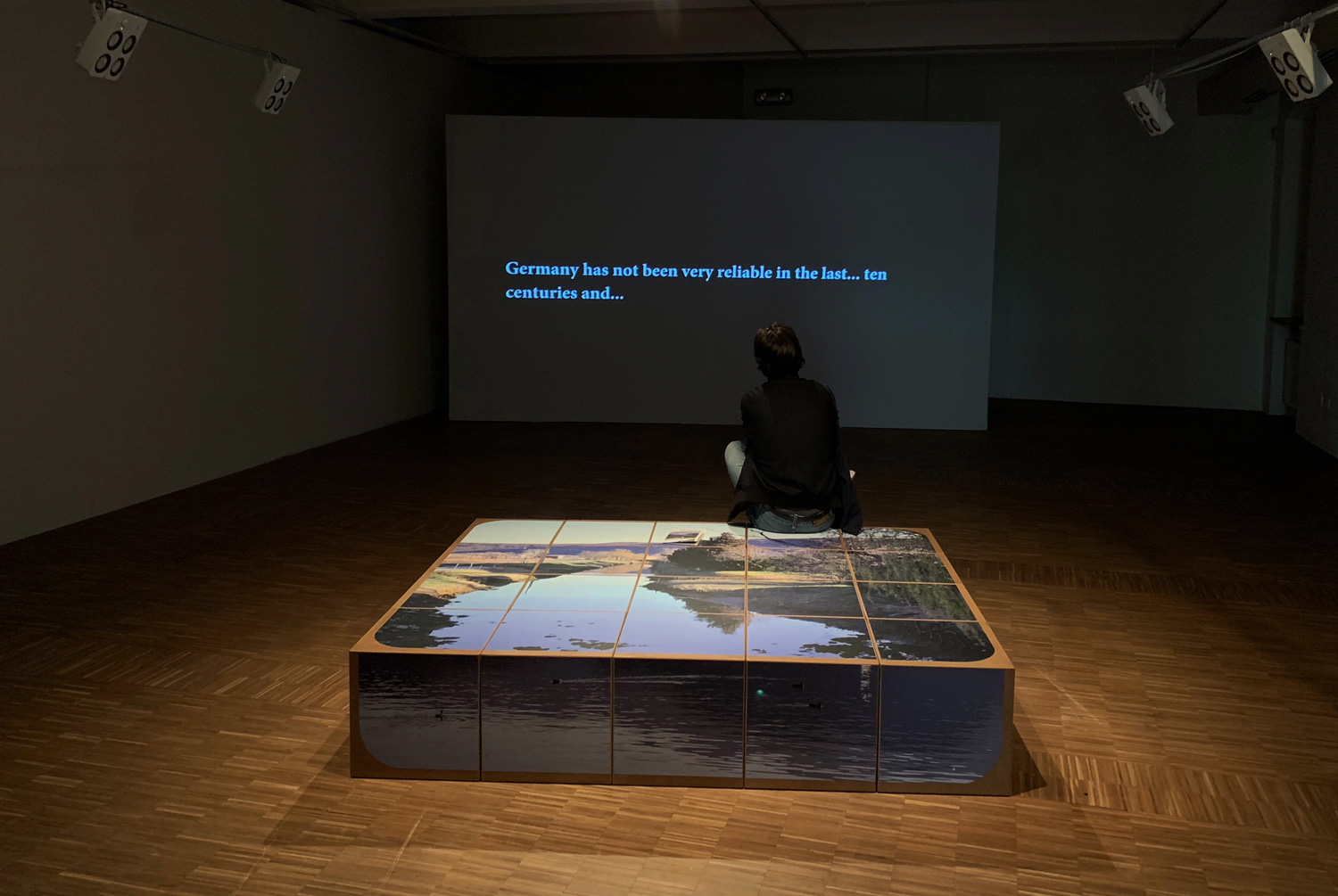 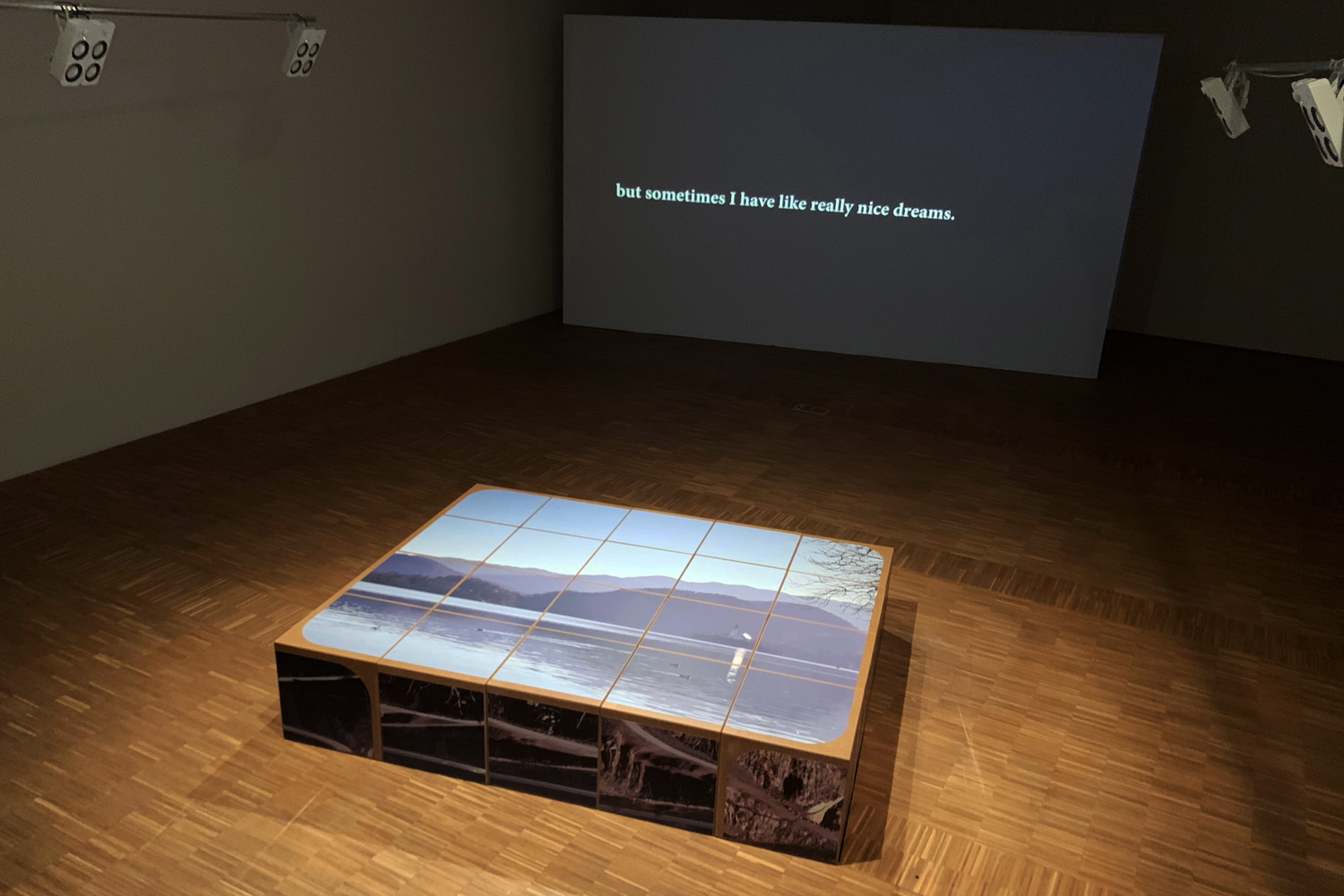 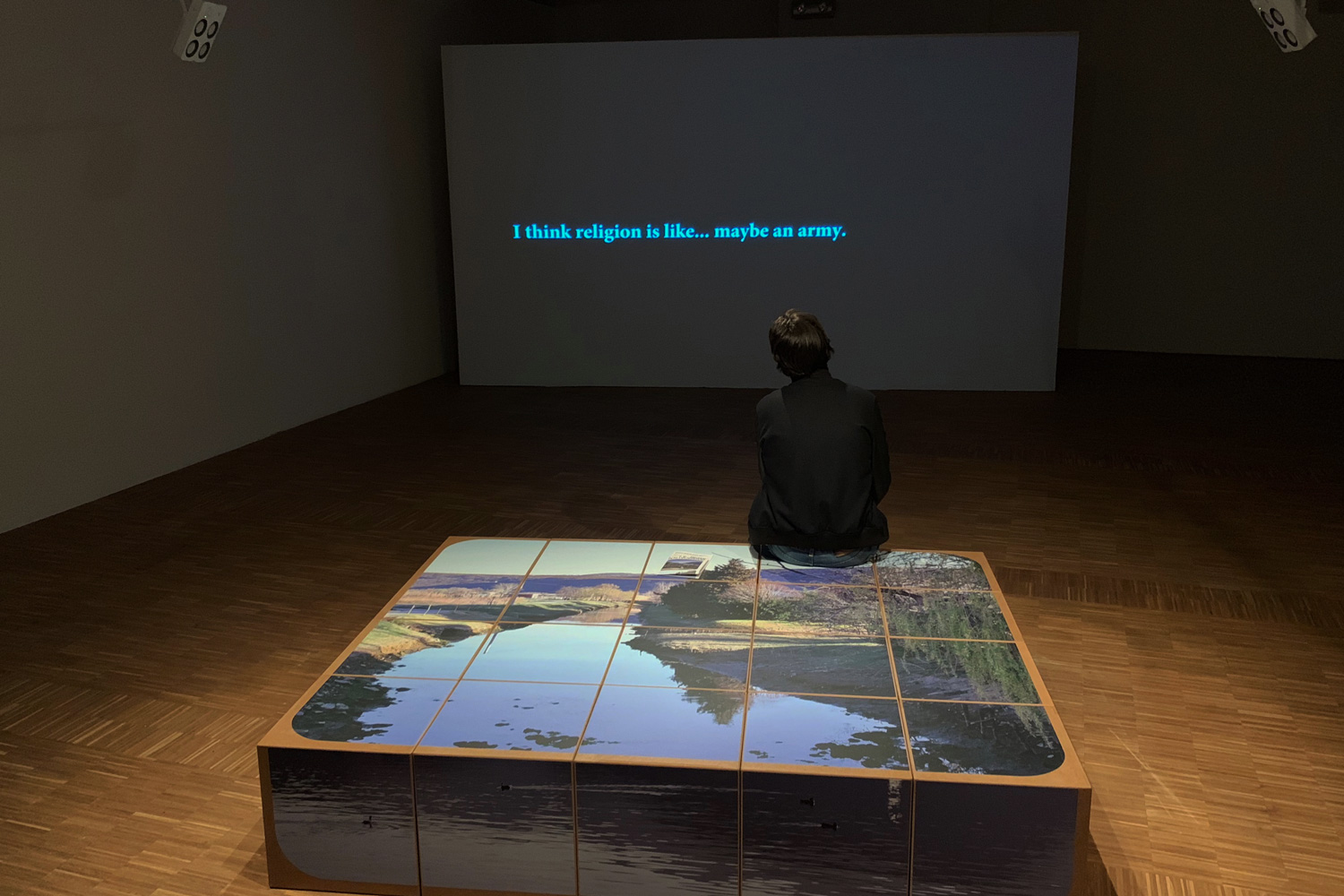 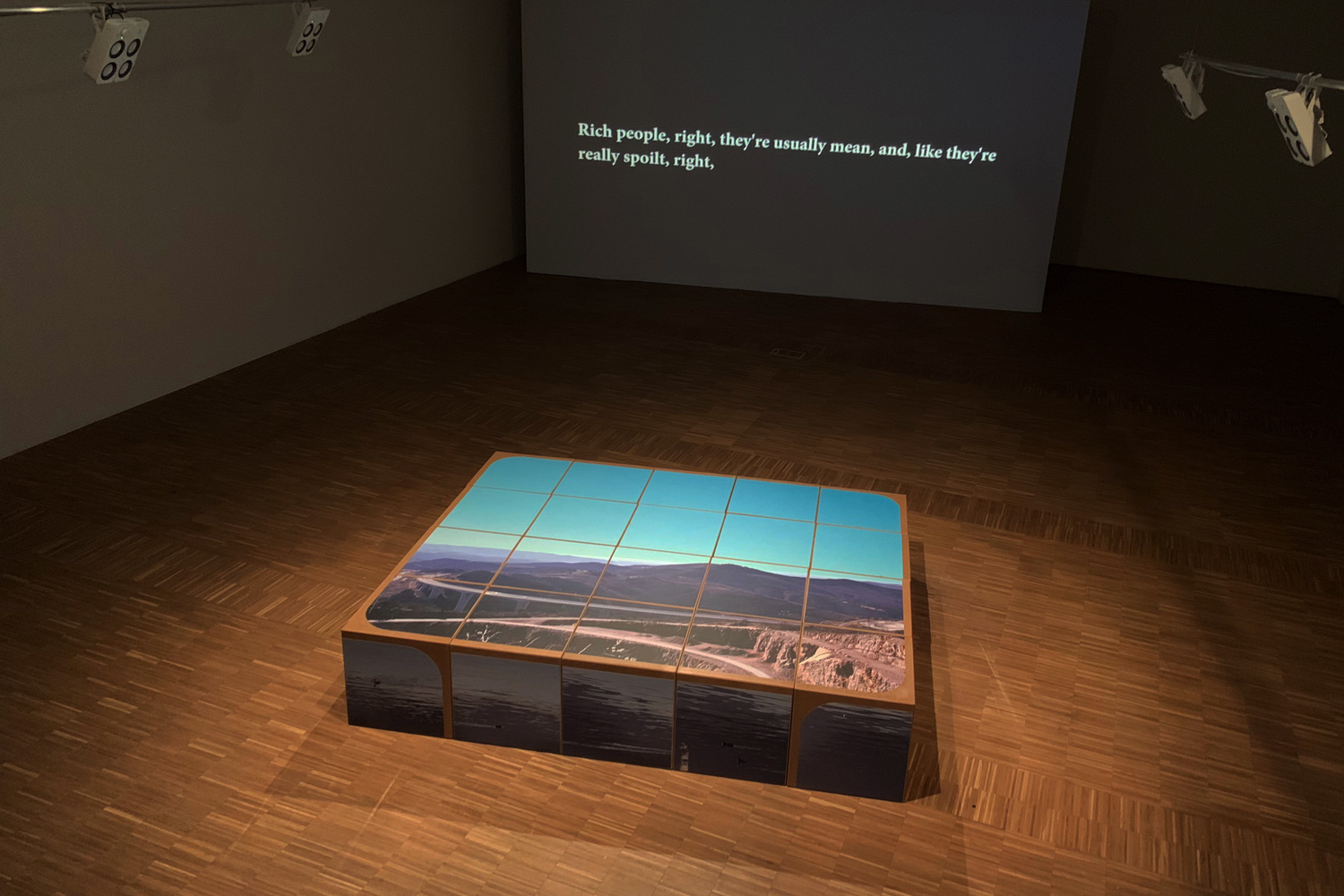 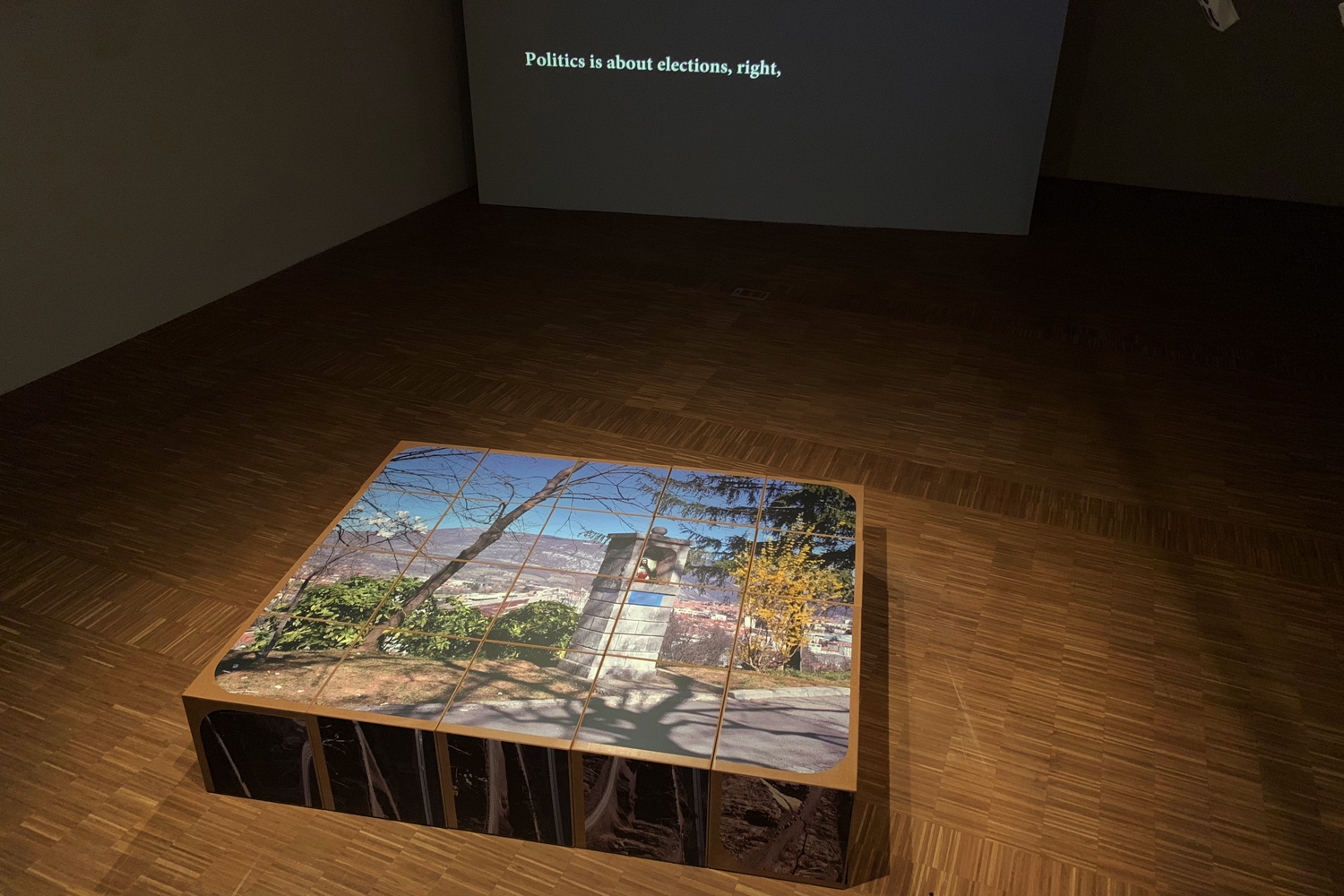 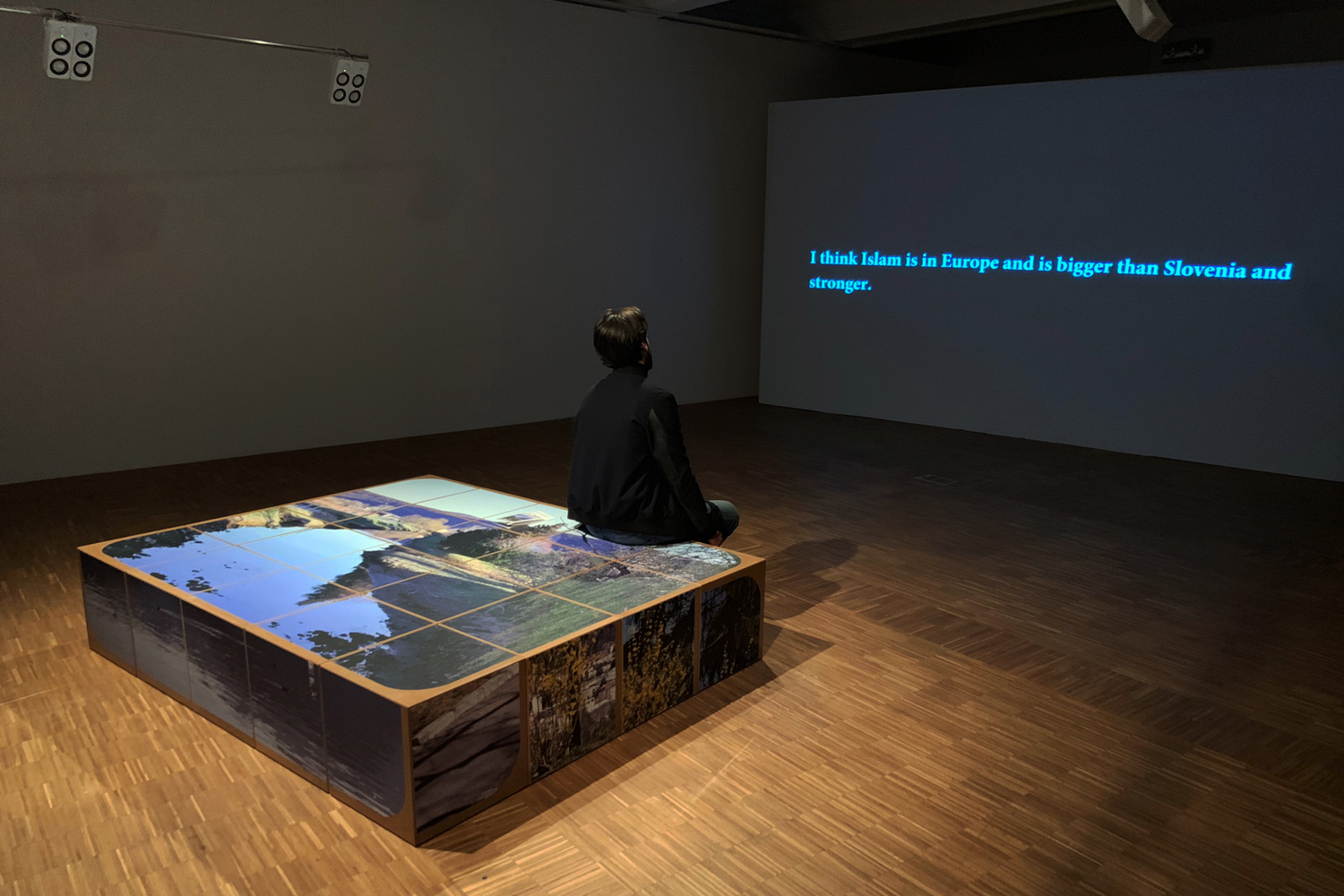 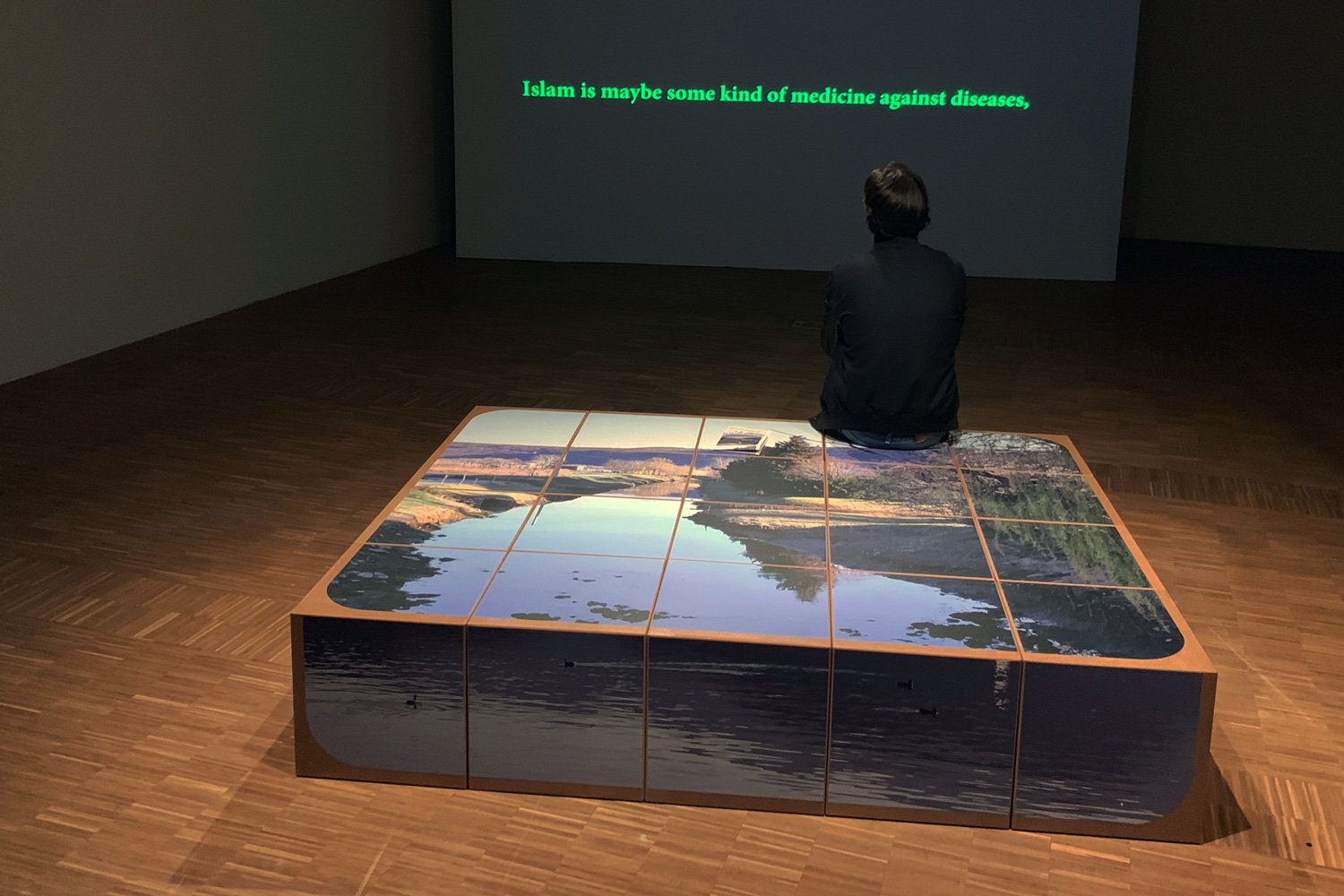 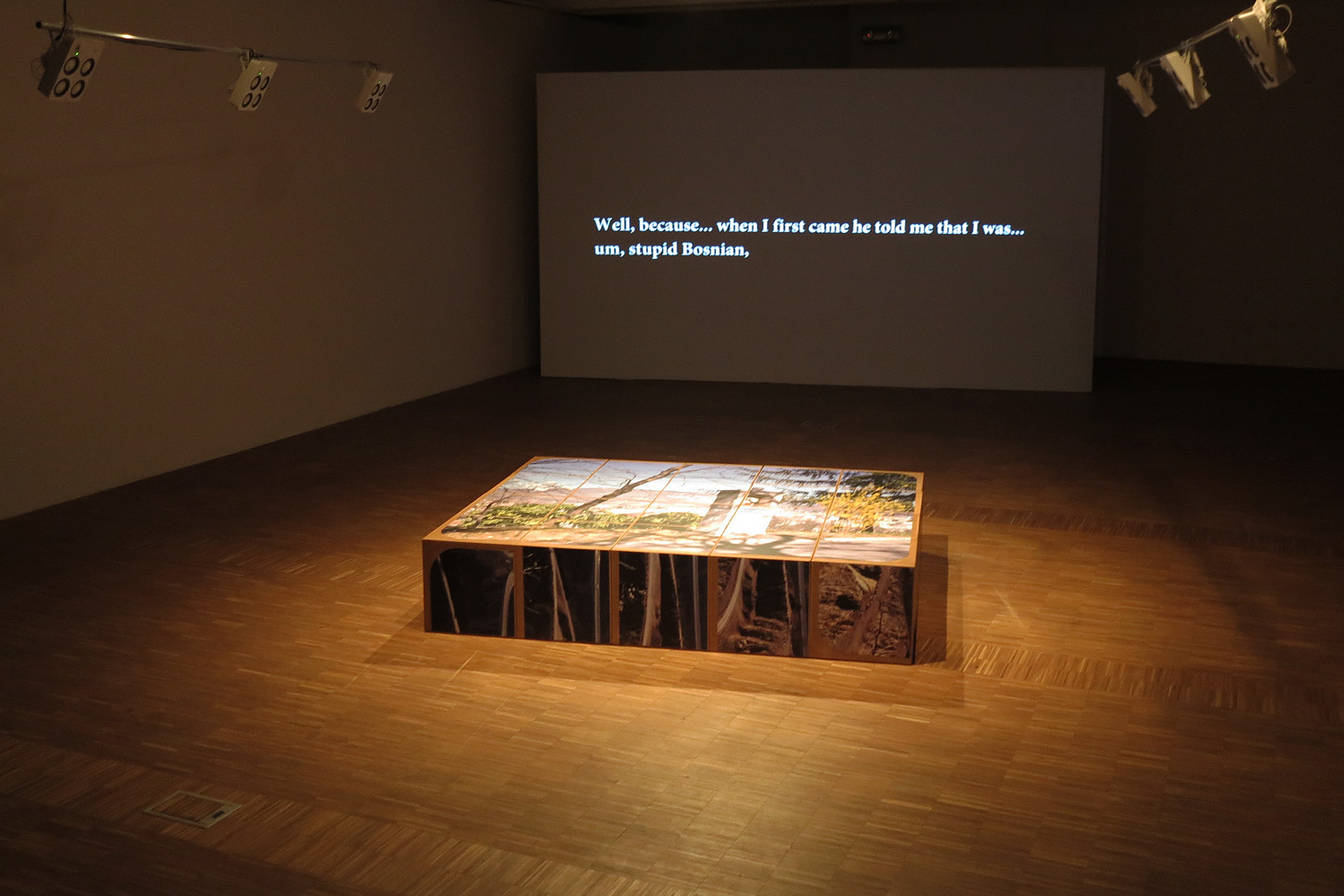 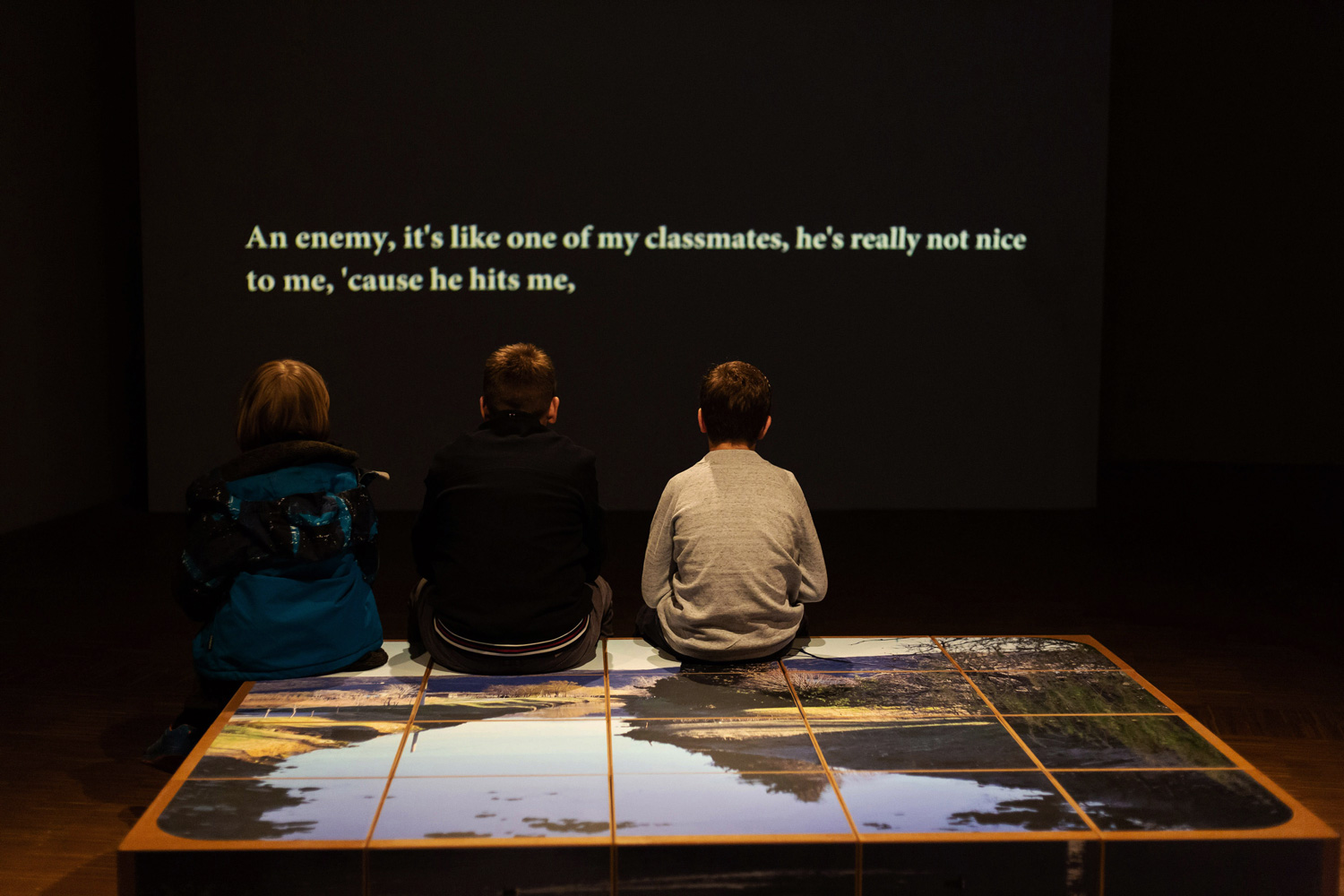 Each installation is made in relation to the local site and accompanied with a sound piece emitted from 6 – 7 speakers (each speaker for the voice of one child); the children are narrating/answering questions about political issues such as social exclusion and inclusion, about foreigners, language, war, money, poverty.

This installation is made out of 20 puzzle cubes that put together make one of possible six images of beautiful landscapes. The artist exposes political landscapes framed by images of Slovenian natural treasures through which symptomatic details of an oppressive politics no longer remain hidden. 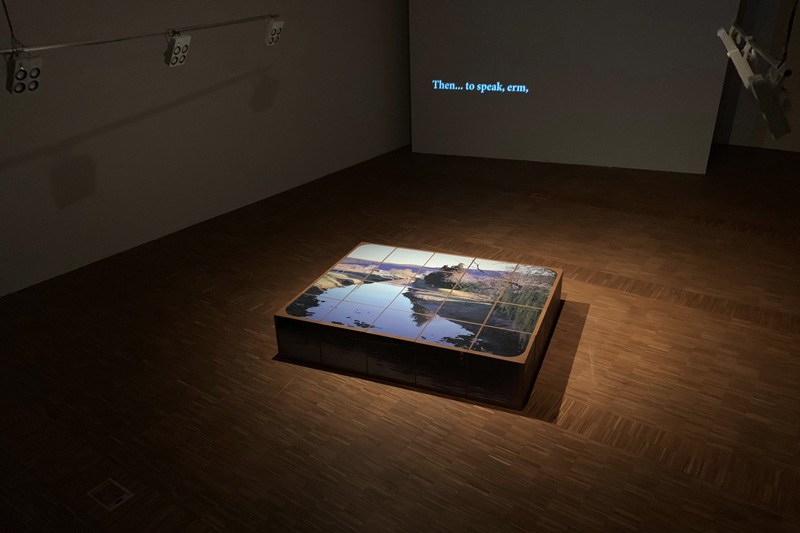 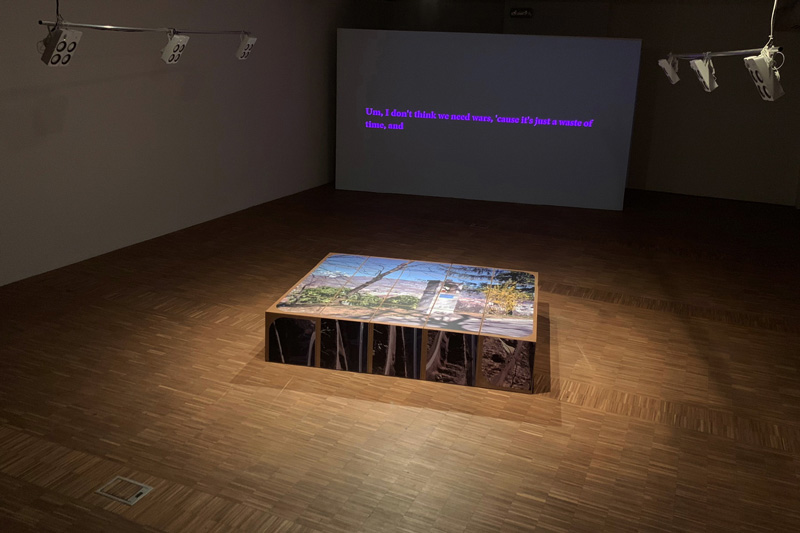 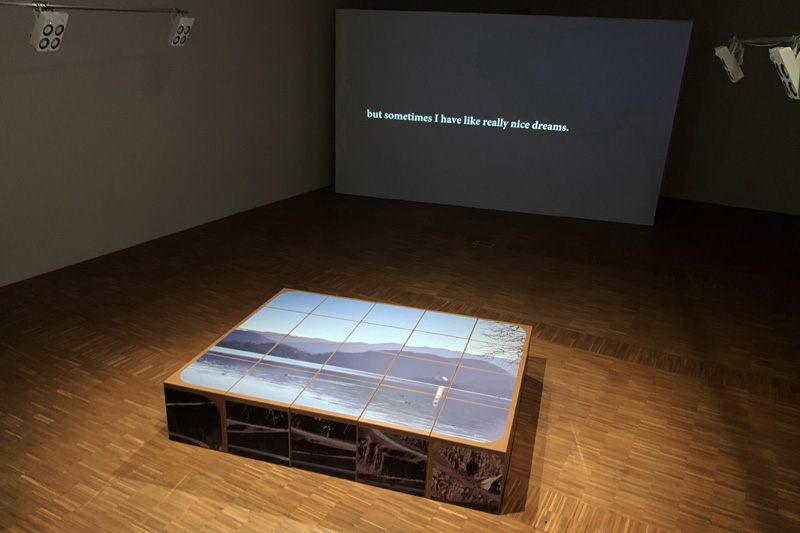 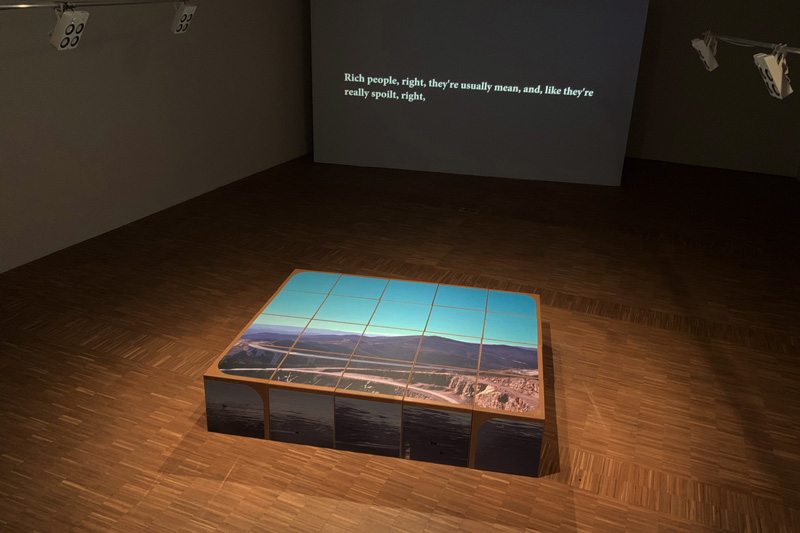 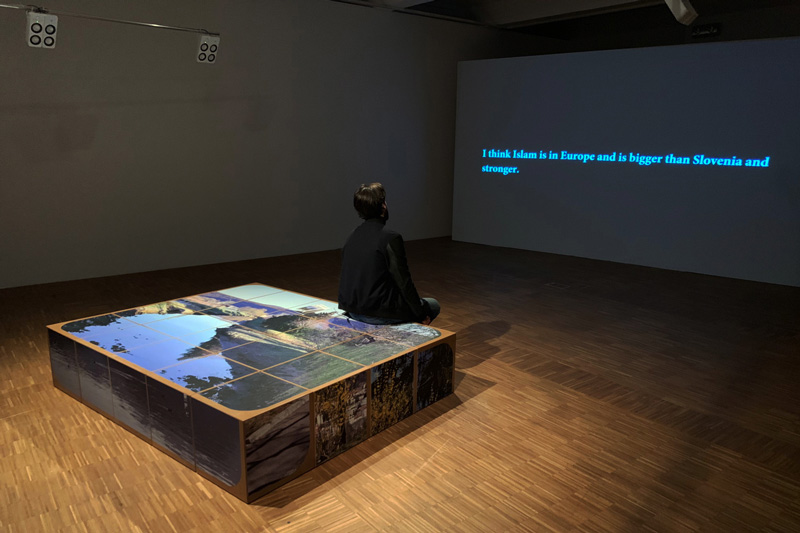 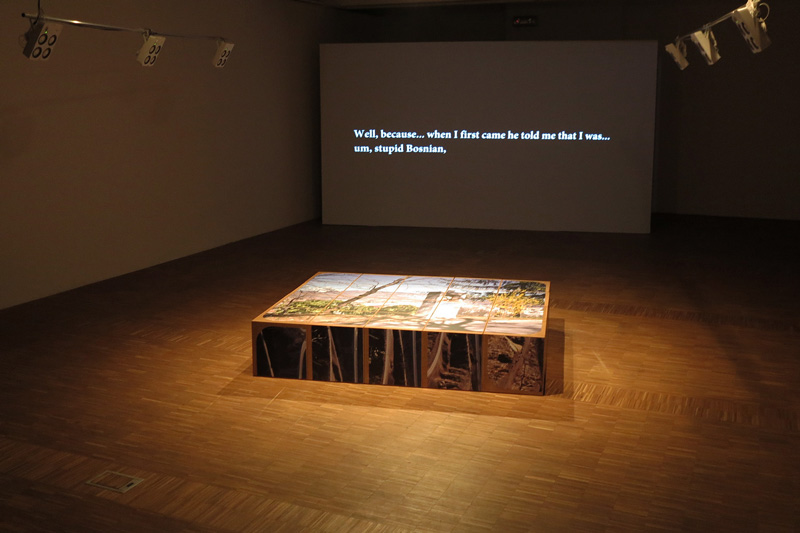 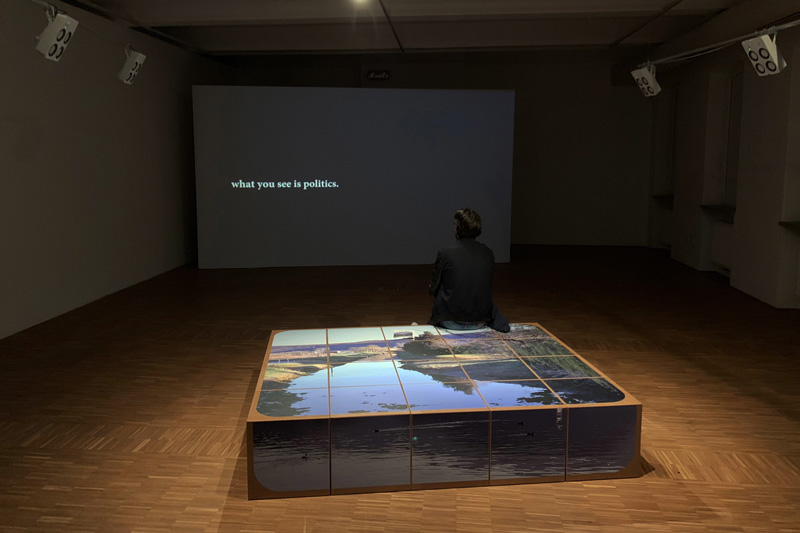 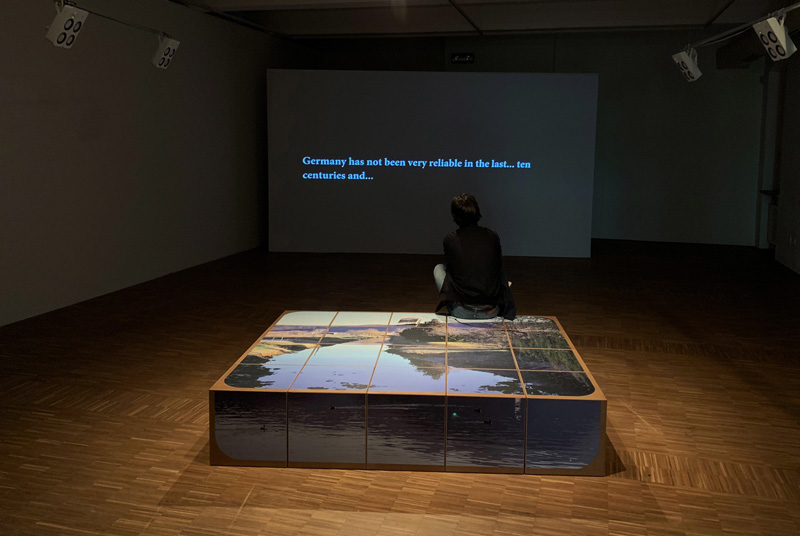 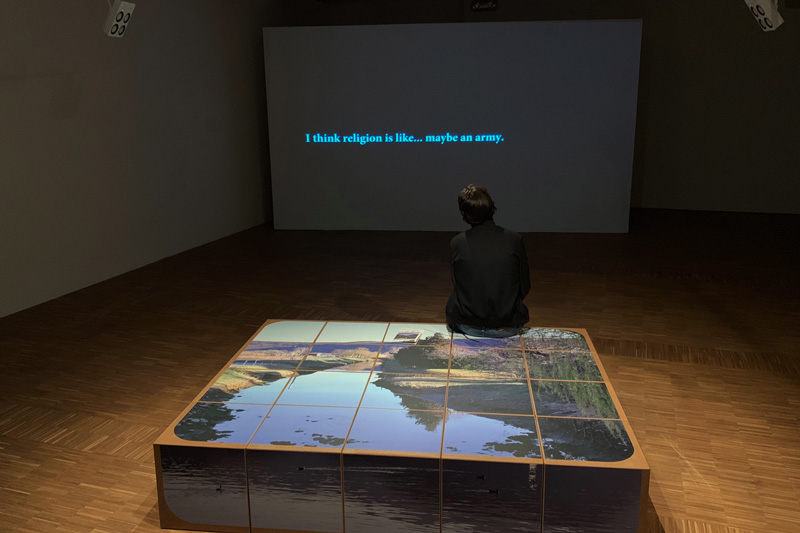 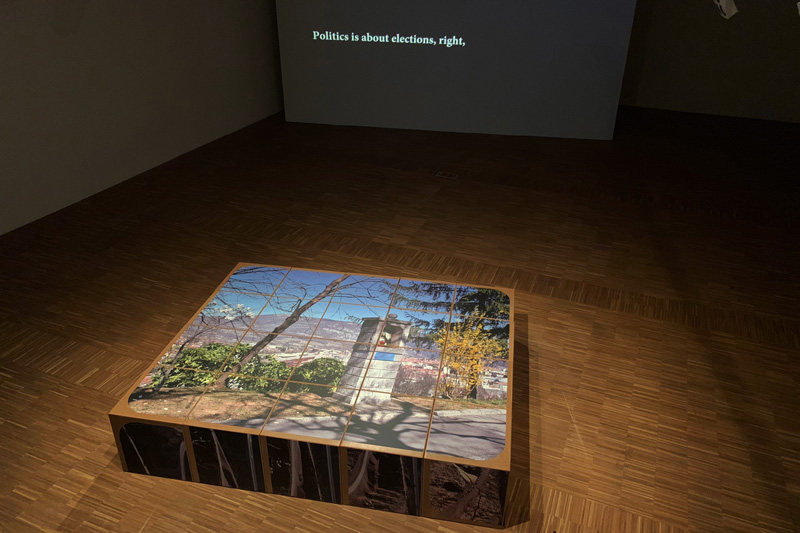 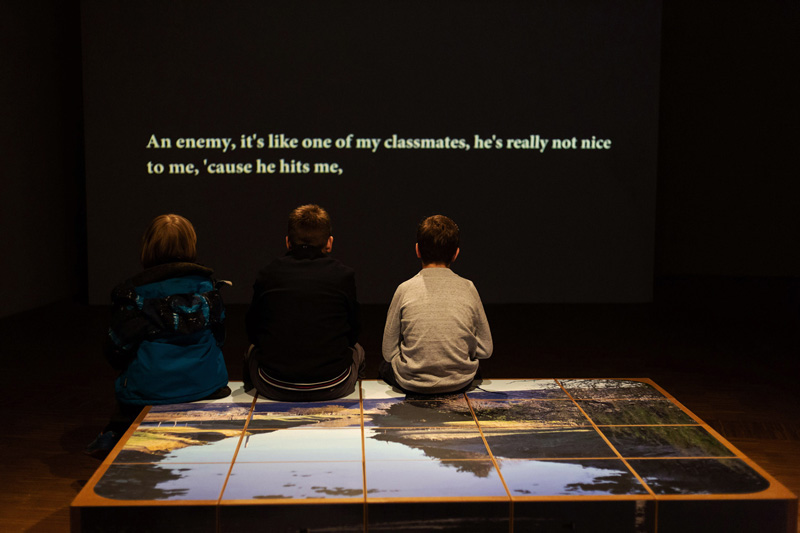 I think that we are, that most Slovenians are very humble, um, that we’re nice, that we know how to take care of the environment, most of us do (Alina, 10 years old)

Growing up is politics, conditioned ideologically and affectively by the social communities that surround us. Referring to this, Dejan Kaludjerović’s art project: Conversations: Hula-Hoops, Elastics, Marbles and Sand (2013–present) reminds of the fact that childhood is not spared from political reality and political thought, however much this period of life, often referred to as the age of innocence, may be devoid of social responsibility for the things that happen and will continue to happen in the future. The playground as the basic setting of the exhibition is presented as the place where innocence, ingenuity and imagination blur those safe zones within which the banality of evil vis-à-vis society, that is, vis-à-vis the other, is for the first time manifested in each individual childhood.

With this new edition of Conversations: Puzzle Cubes made in Slovenia, Kaludjerović exposes a political landscape framed by images of Slovenian natural treasures through which symptomatic details of an oppressive politics could not be hidden anymore. Observing the landscapes which always been connected to the Slovenian national pride and identity, there are visible and invisible borders shaped by local knowledge, media’s footages, EU economy and political public stages. Such visual narratives touch upon neuralgic points of Slovenian society as its divisions either material (marked by barbwire fences and corruptions) or ideological (generated through hegemonic class, religion, gender and/or nationalist diversifications). Beautiful photo-prints of nature around Dragonja, Piran, Gorica, Črni Kal, Bled and Jesenice, stuck to puzzle cubes “playfully” triggers a political consciousness about unhuman barbwire borders and human unbearable lives, but also about the fact that this g-local neoliberal world produces the deep state of permanent war and its perpetually conflicting identities.

Alongside with these political landscapes, children’s (stereo)typical black-and-white representations of such state paradoxically indicate the complex politics of hegemonic distribution of social, political and economic power. Remaining ethically untouchable and socially unbreakable these children’s observations appear as normative or generally accepted commonplaces of patriarchy, capitalism and racism, not only in Slovenia, but all over the world. What makes Kaludjerović’s Conversations horrifying is not the series of these children’s answers, containing variations to the absorbed social narratives in-between hegemonic and subaltern worlds, but rather the inability to imagine a possible future beyond such oppressive politics which occupies landscapes that belongs to all. 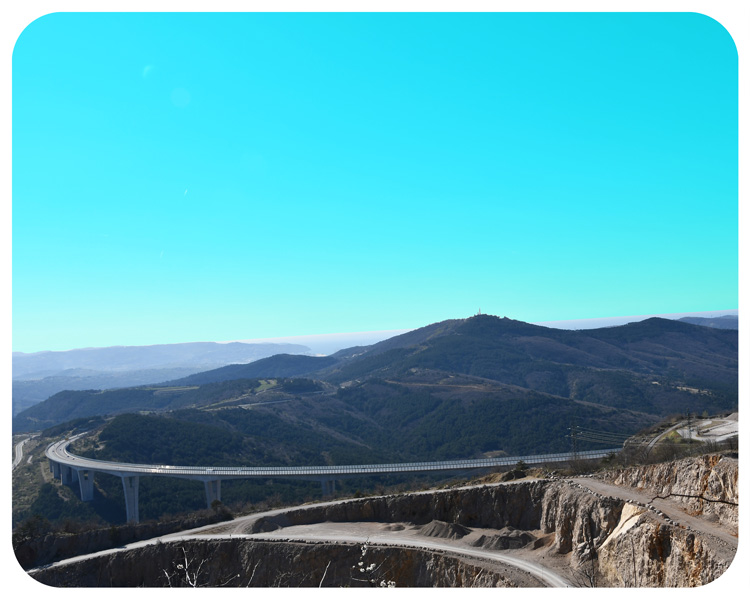 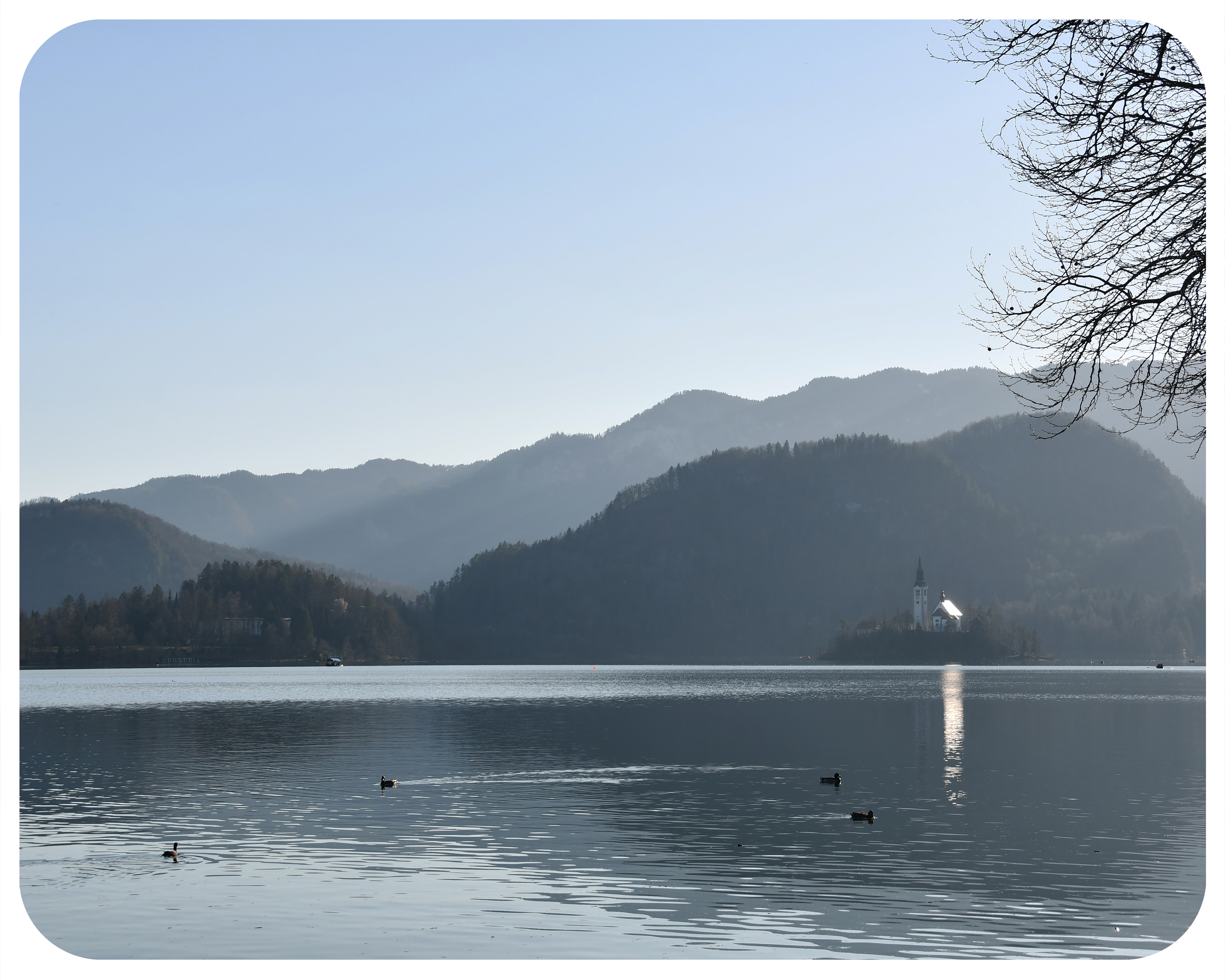 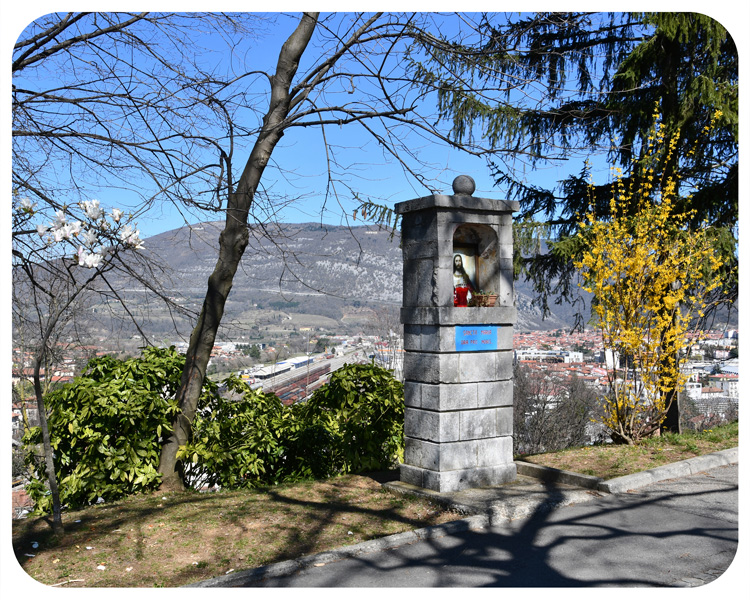 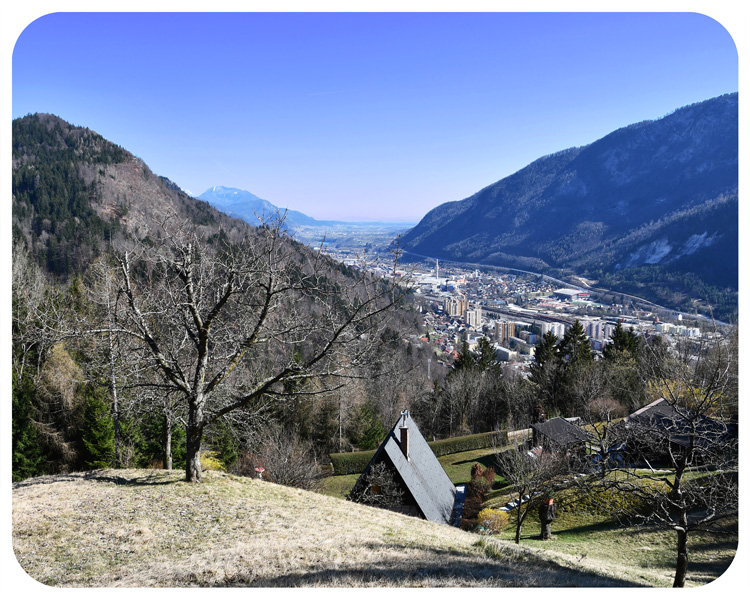 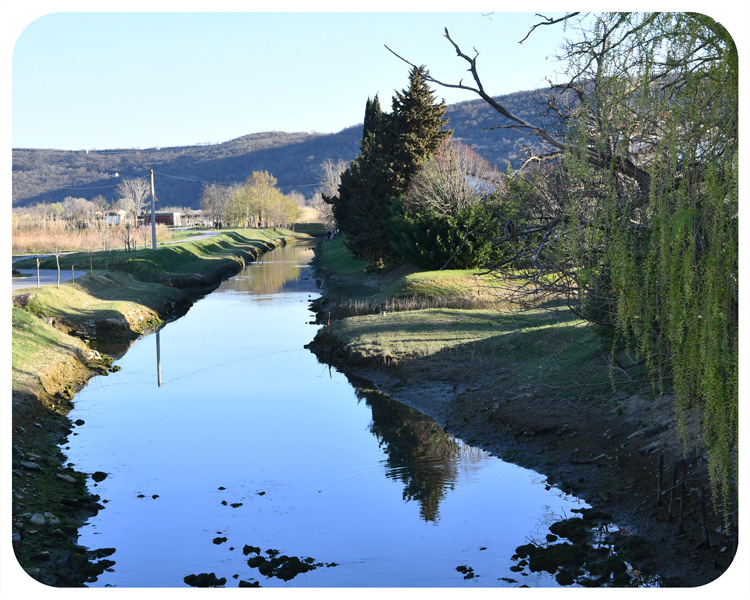 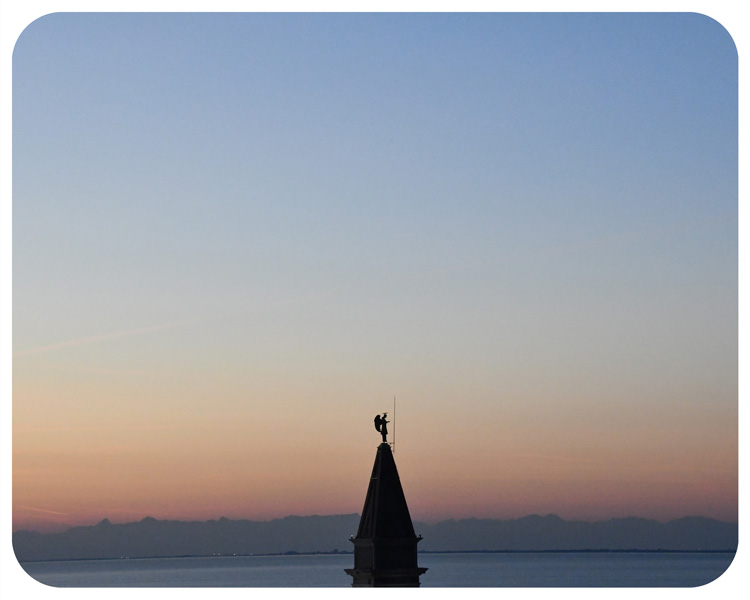 Here you can hear/ see the entire sound installation in Slovenian  and Serbo-Croatian with English subtitles: