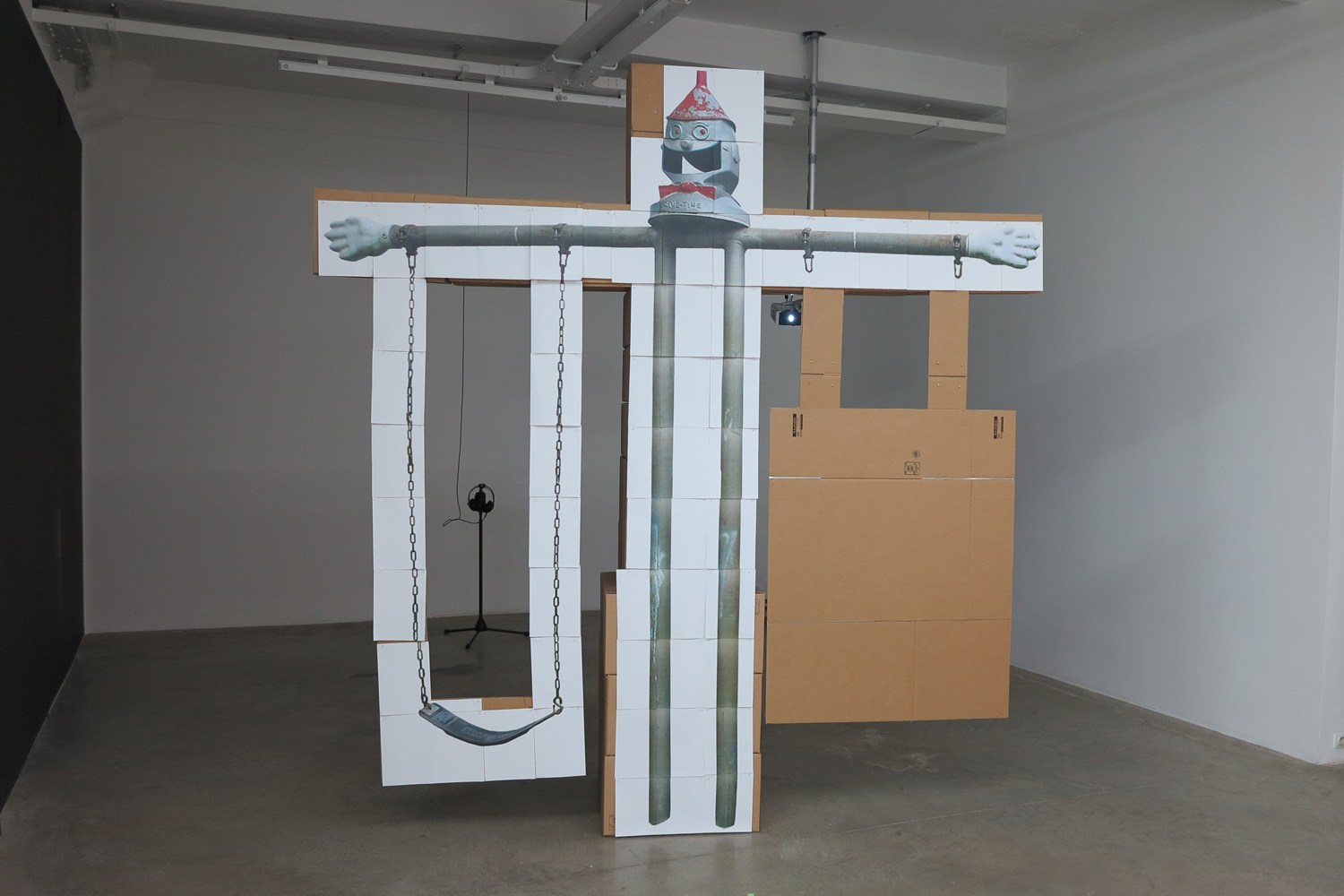 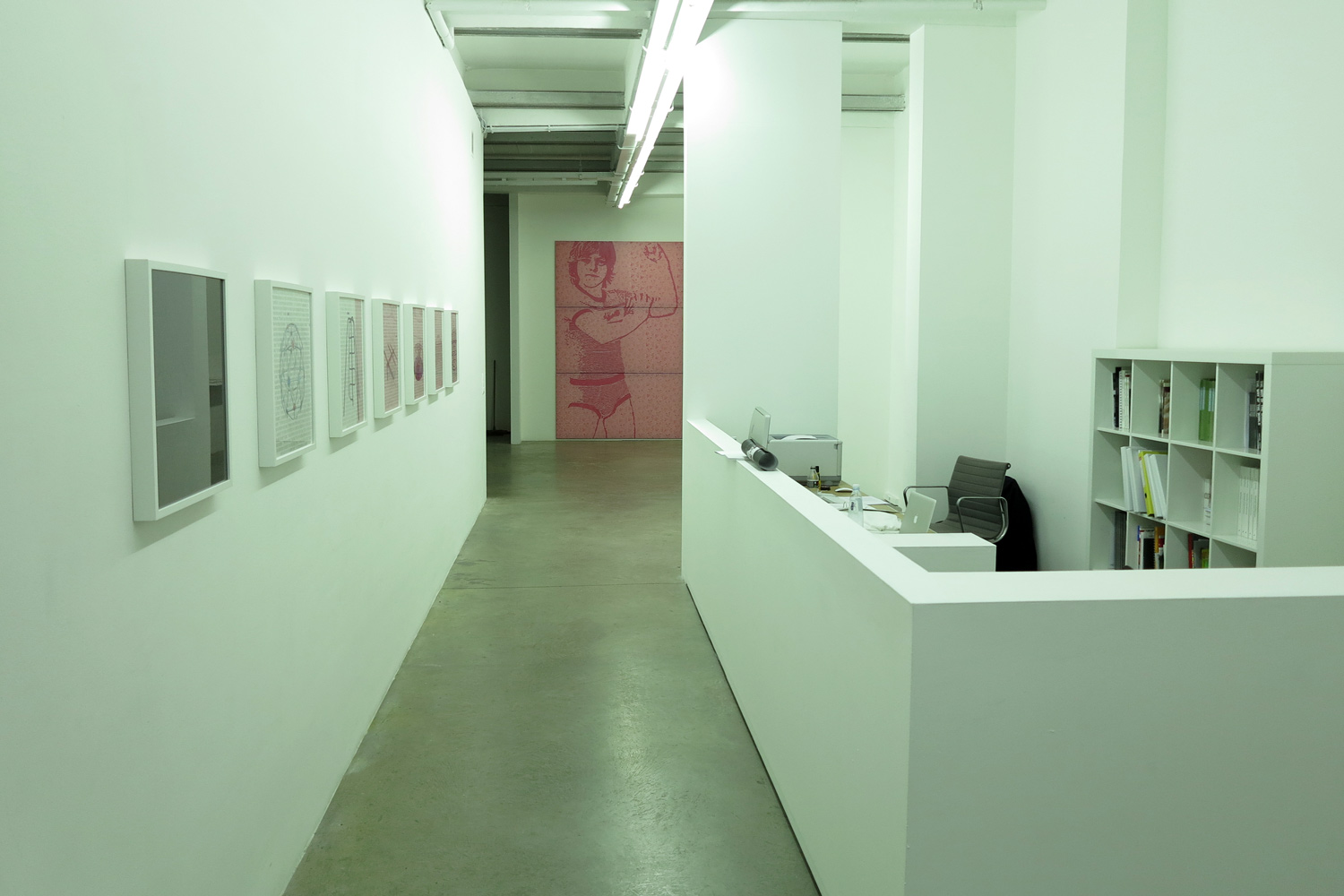 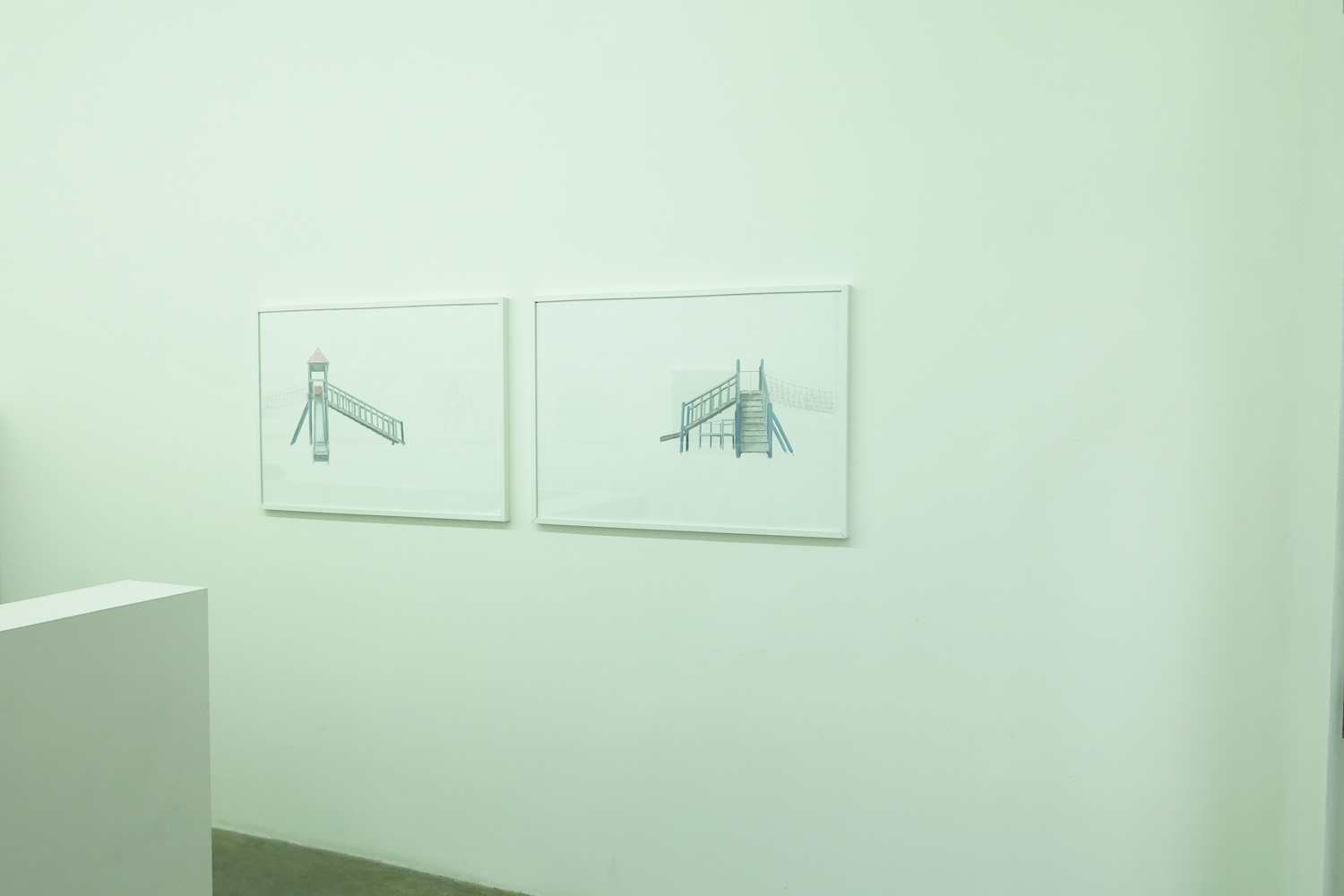 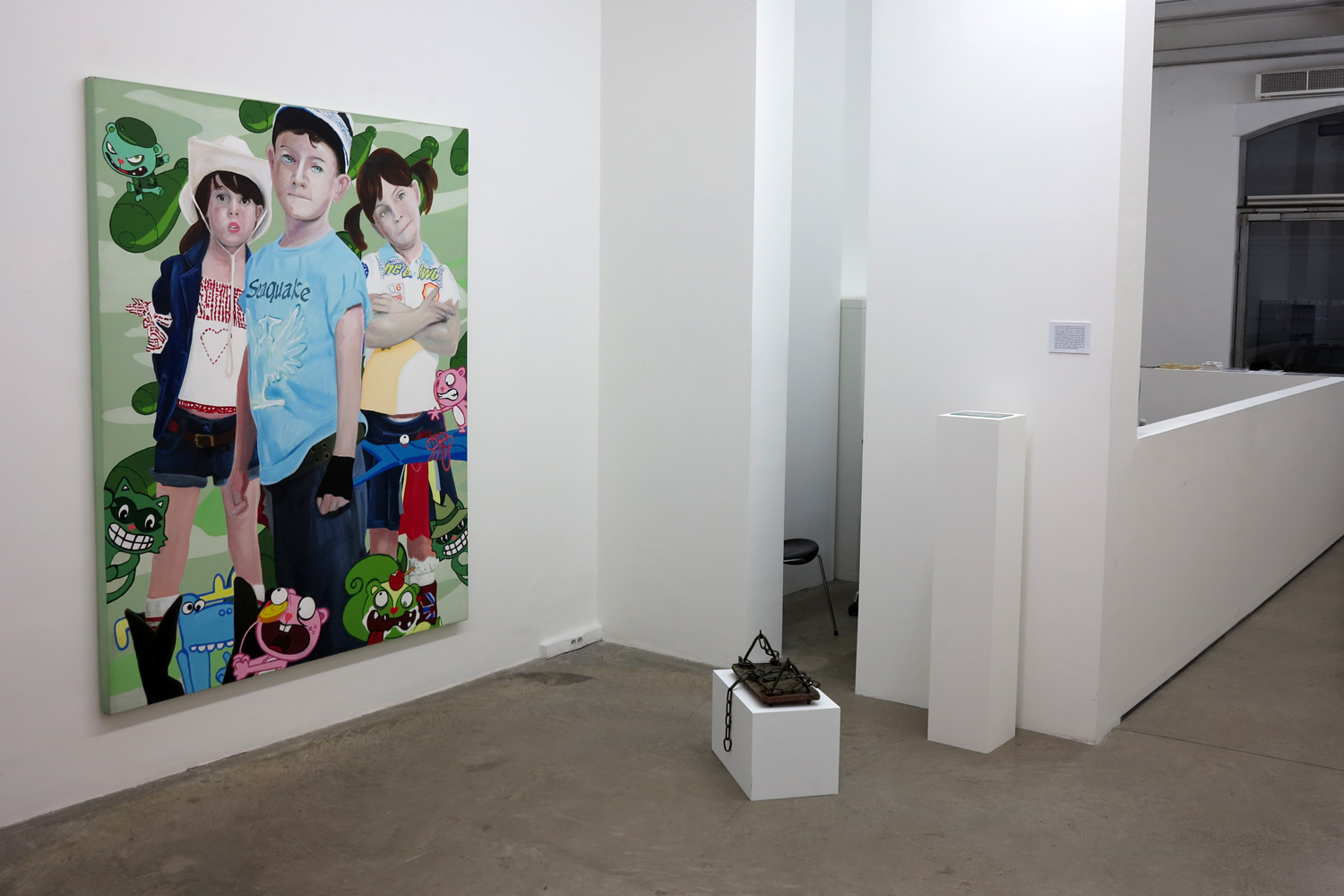 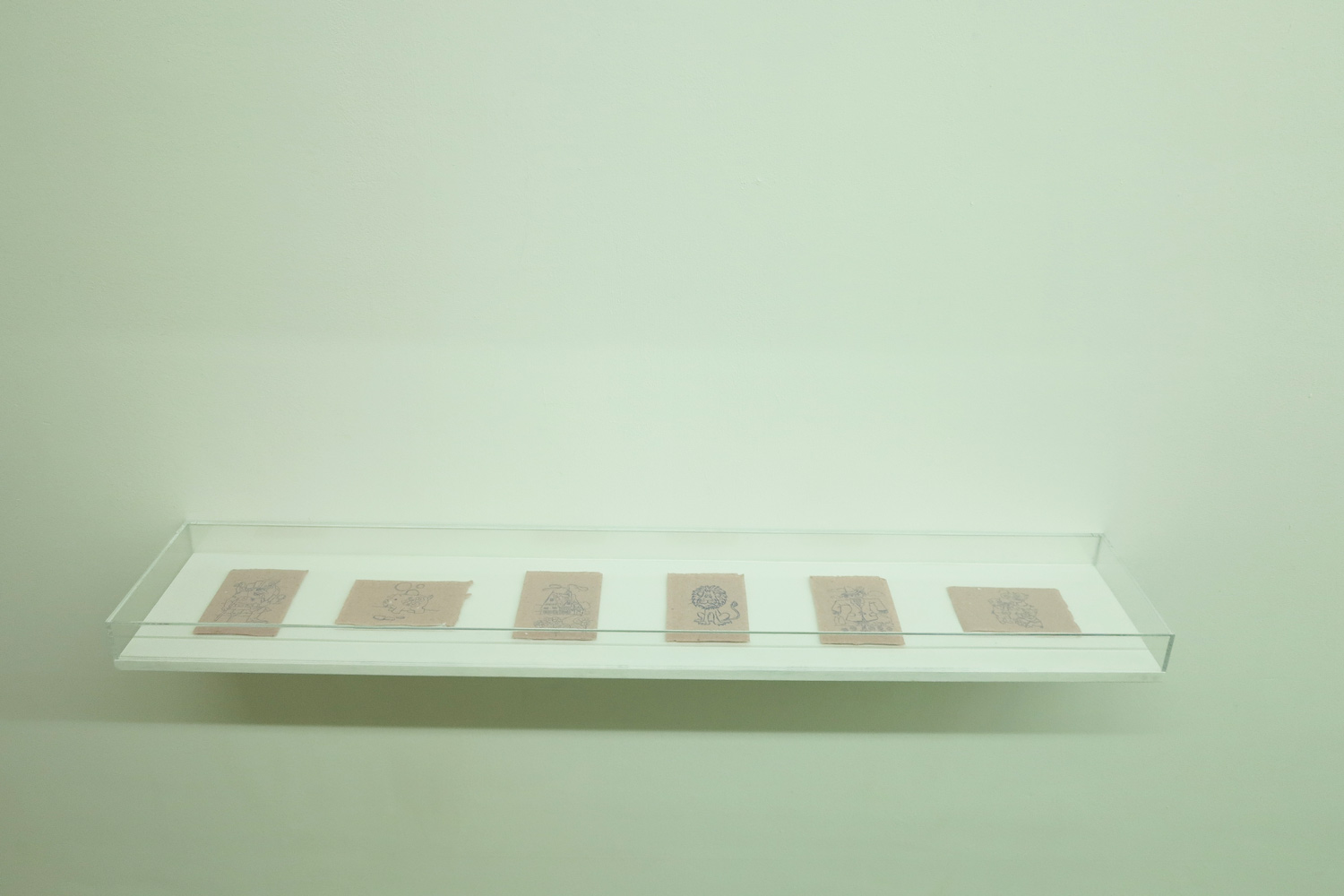 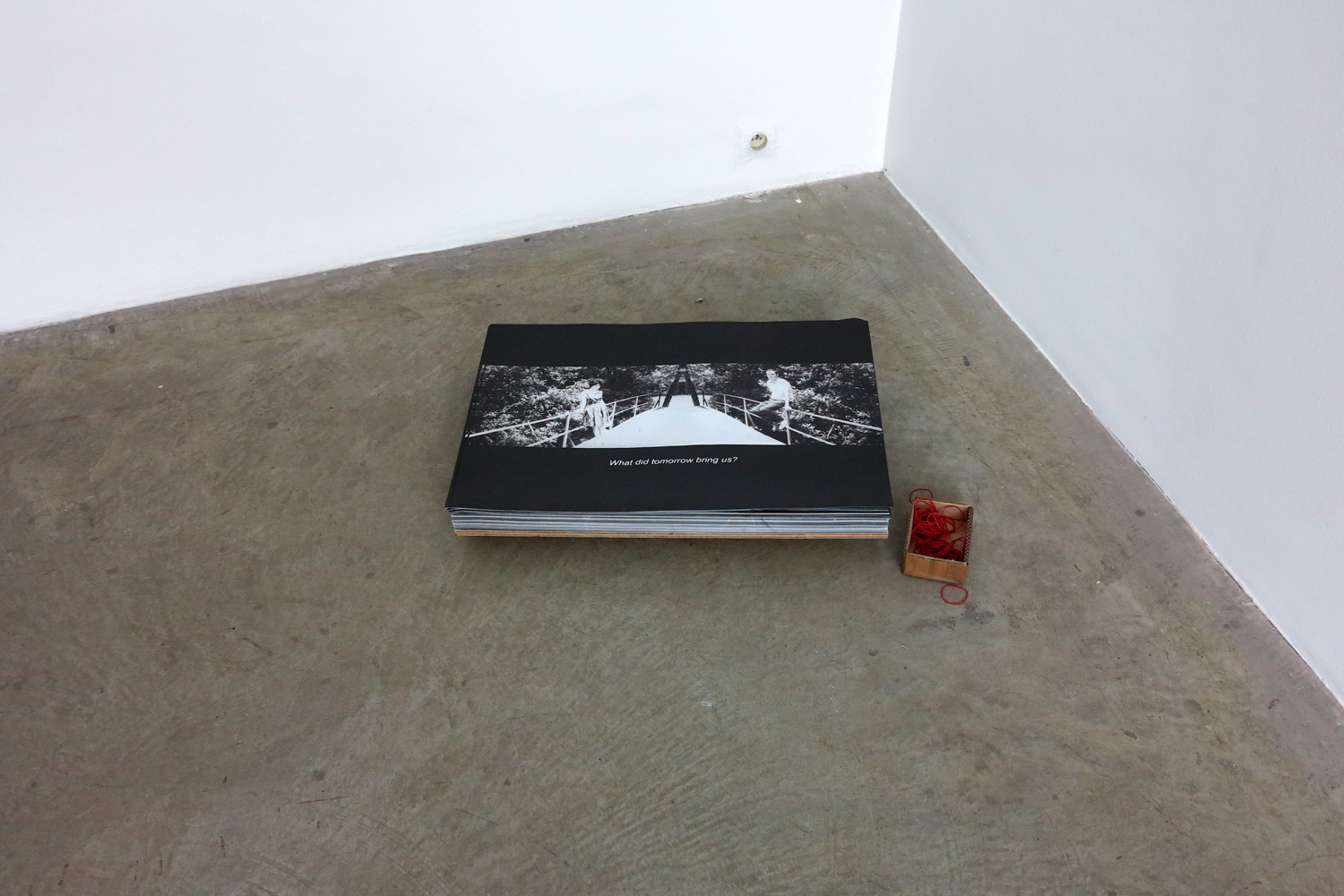 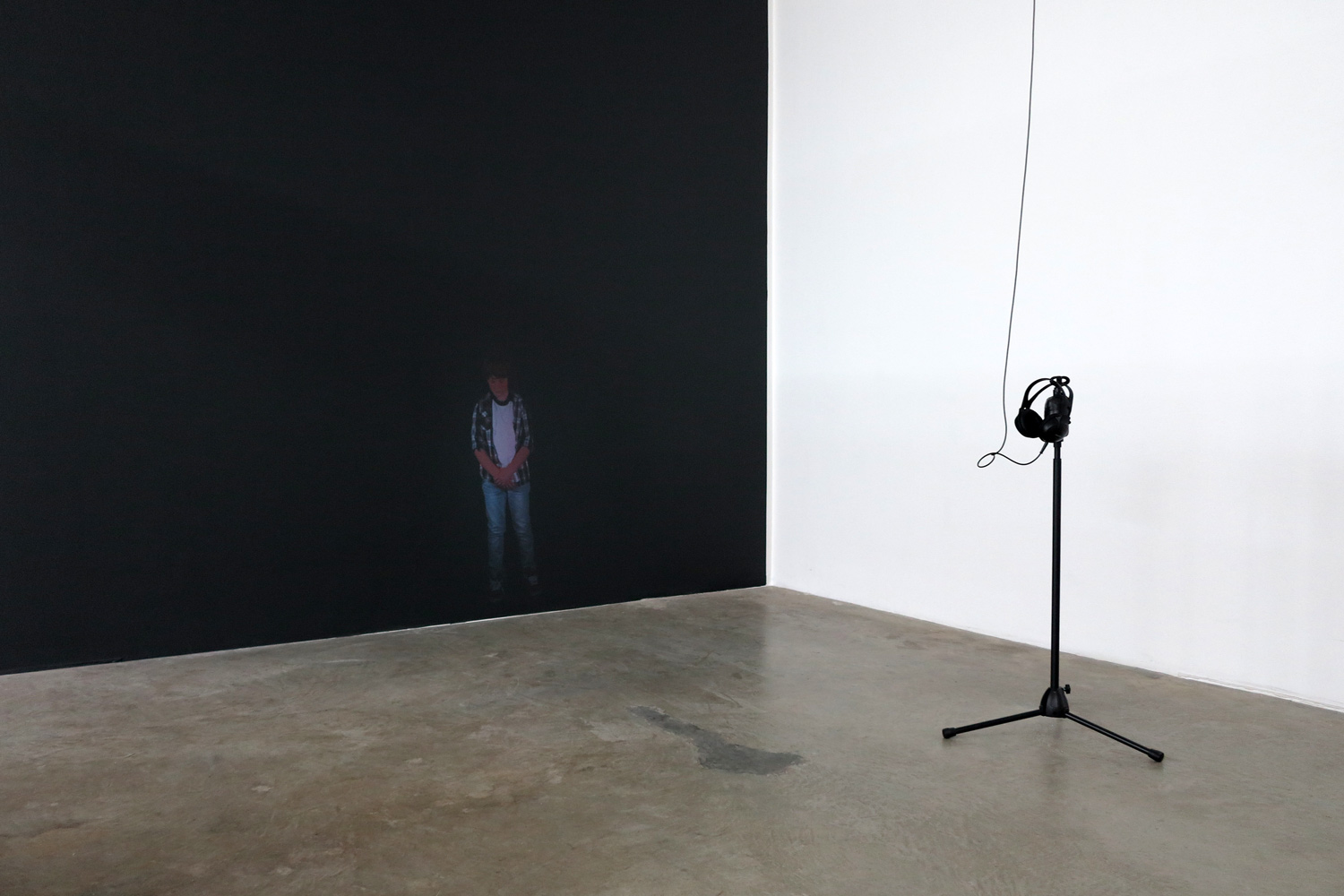 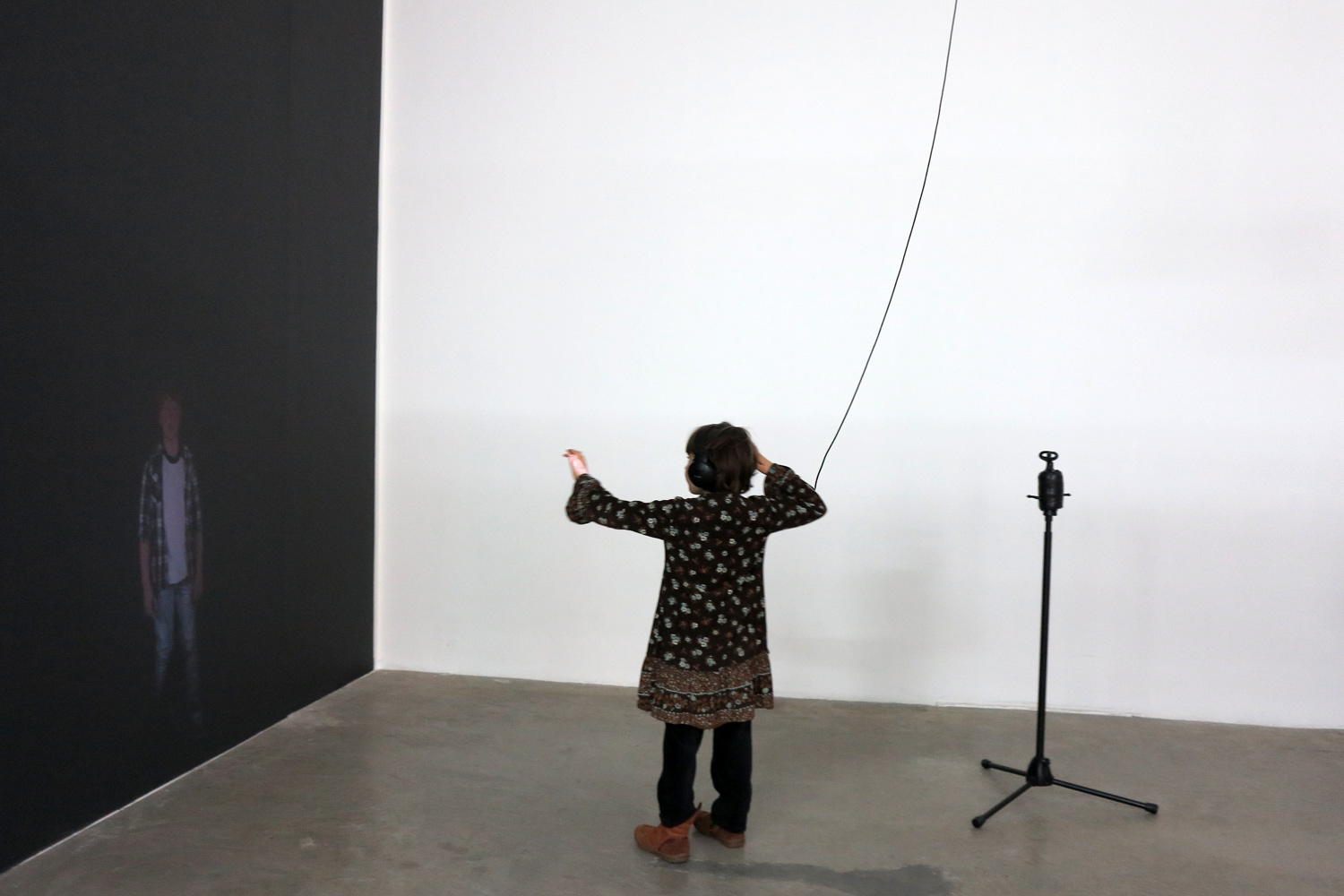 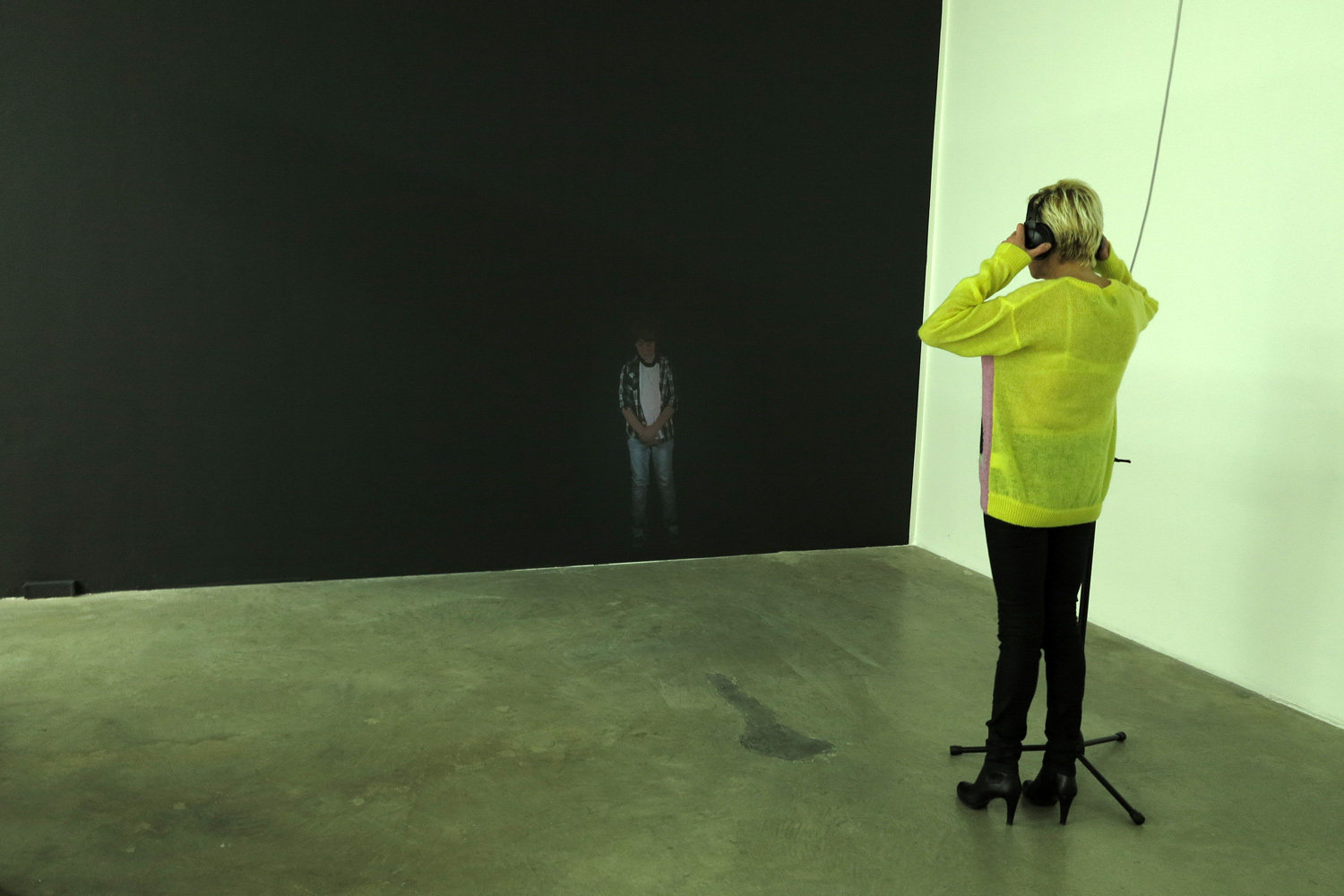 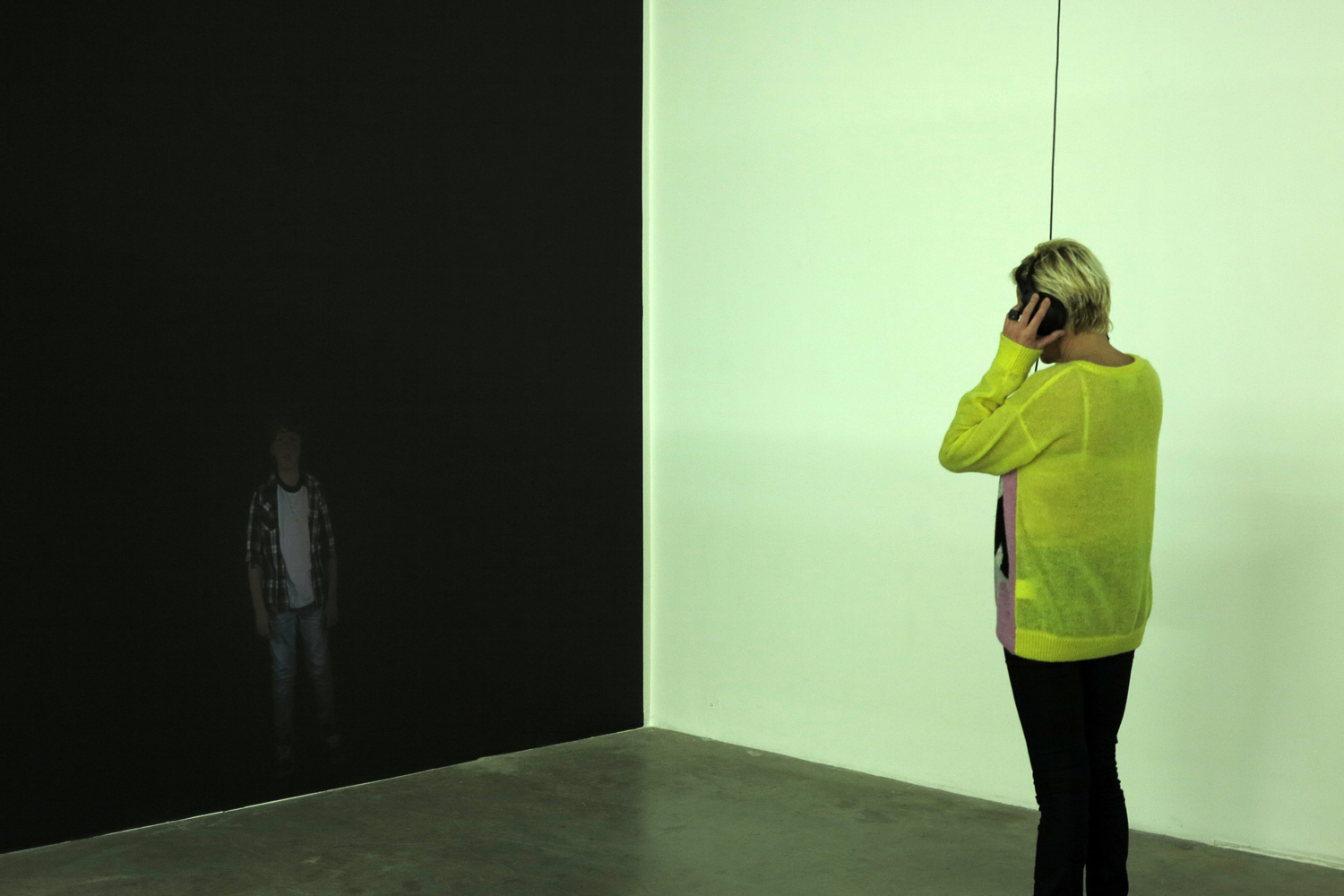 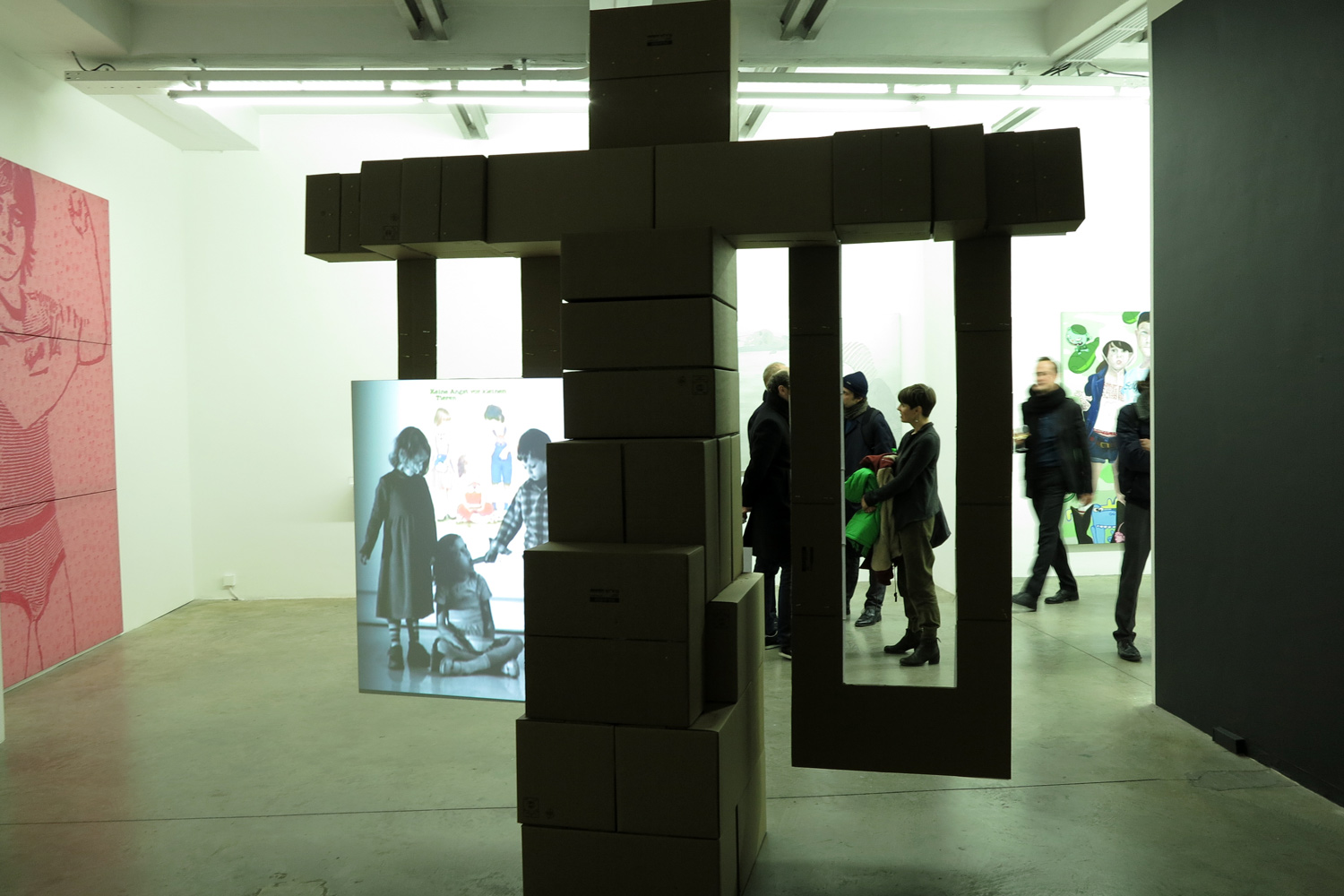 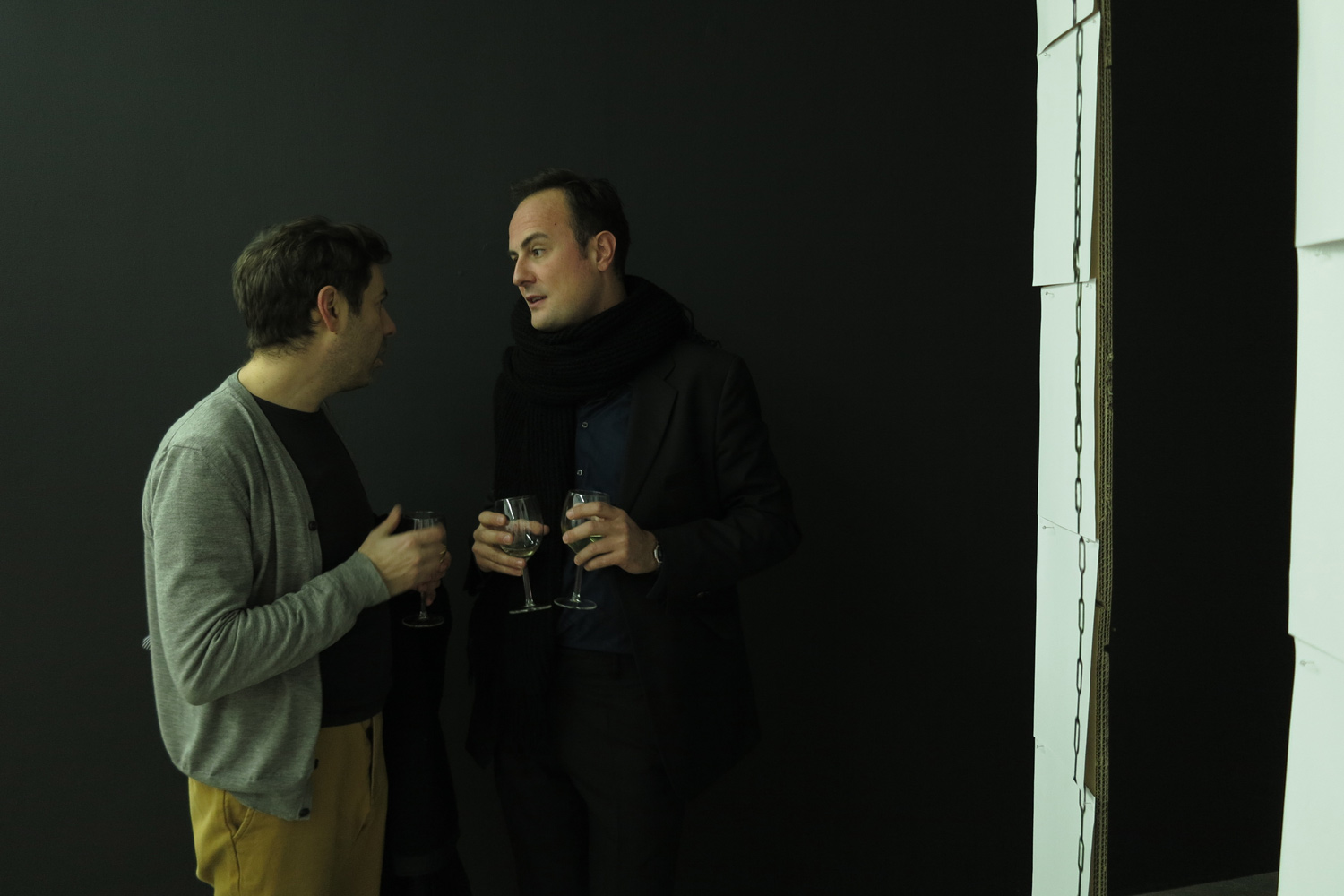 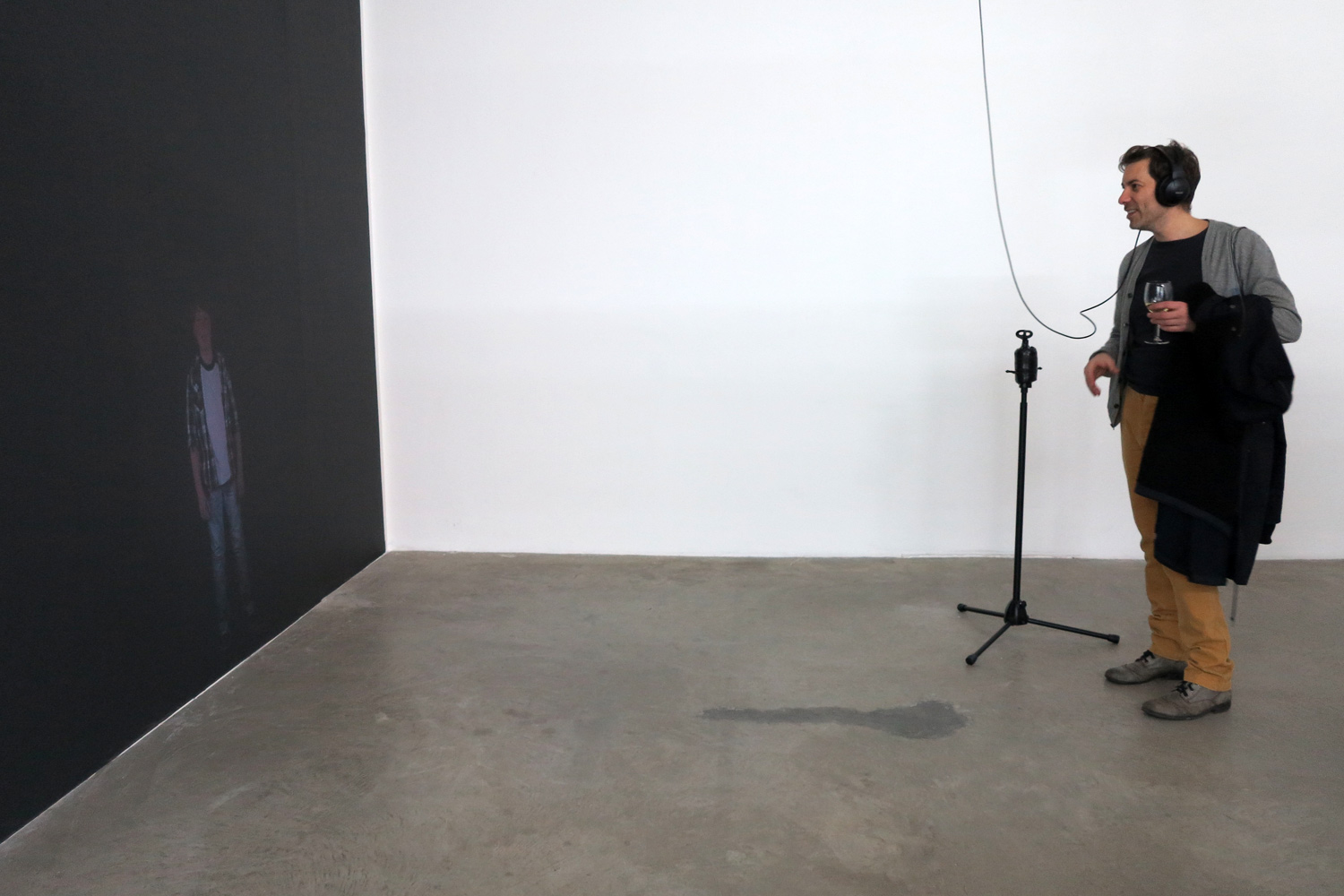 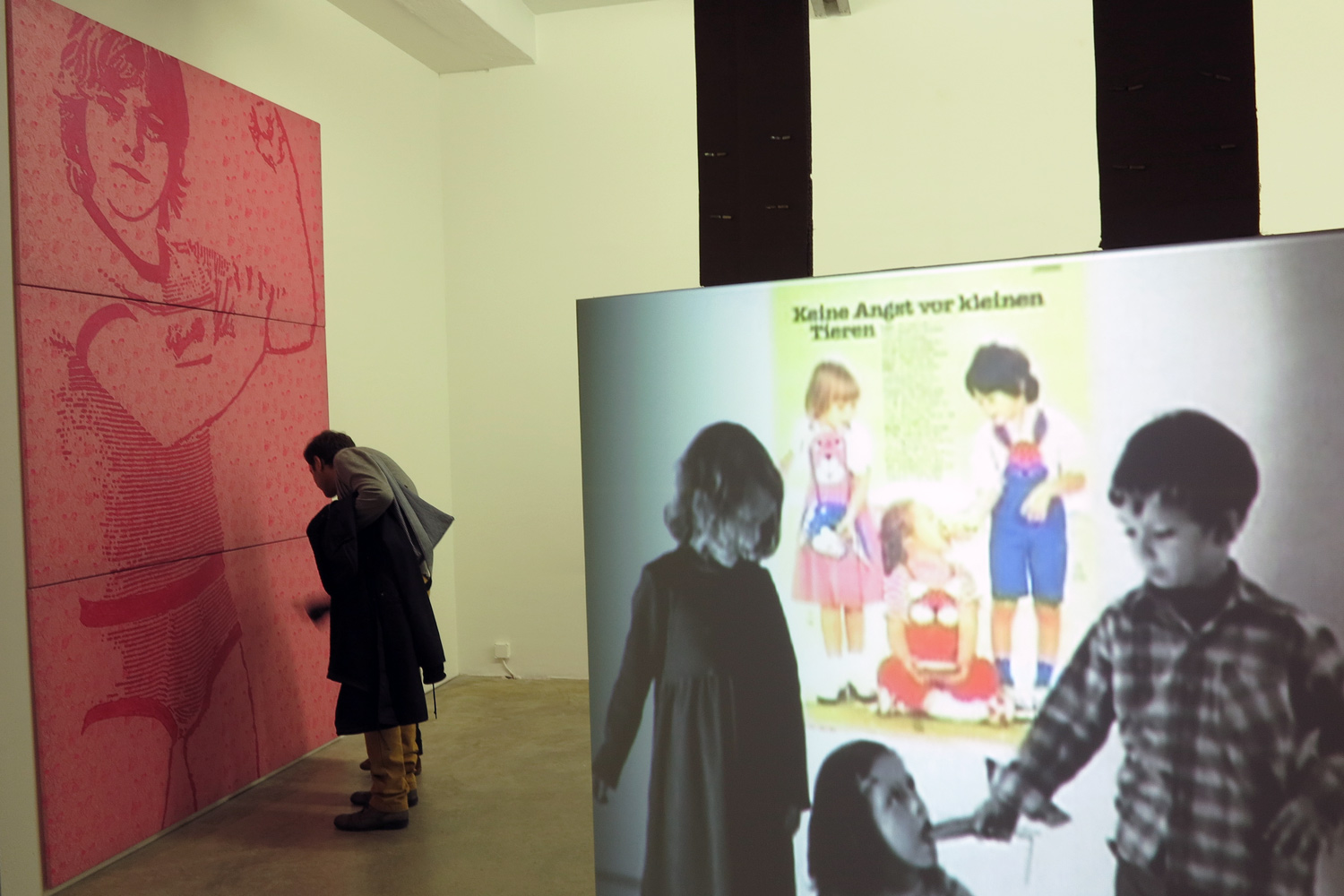 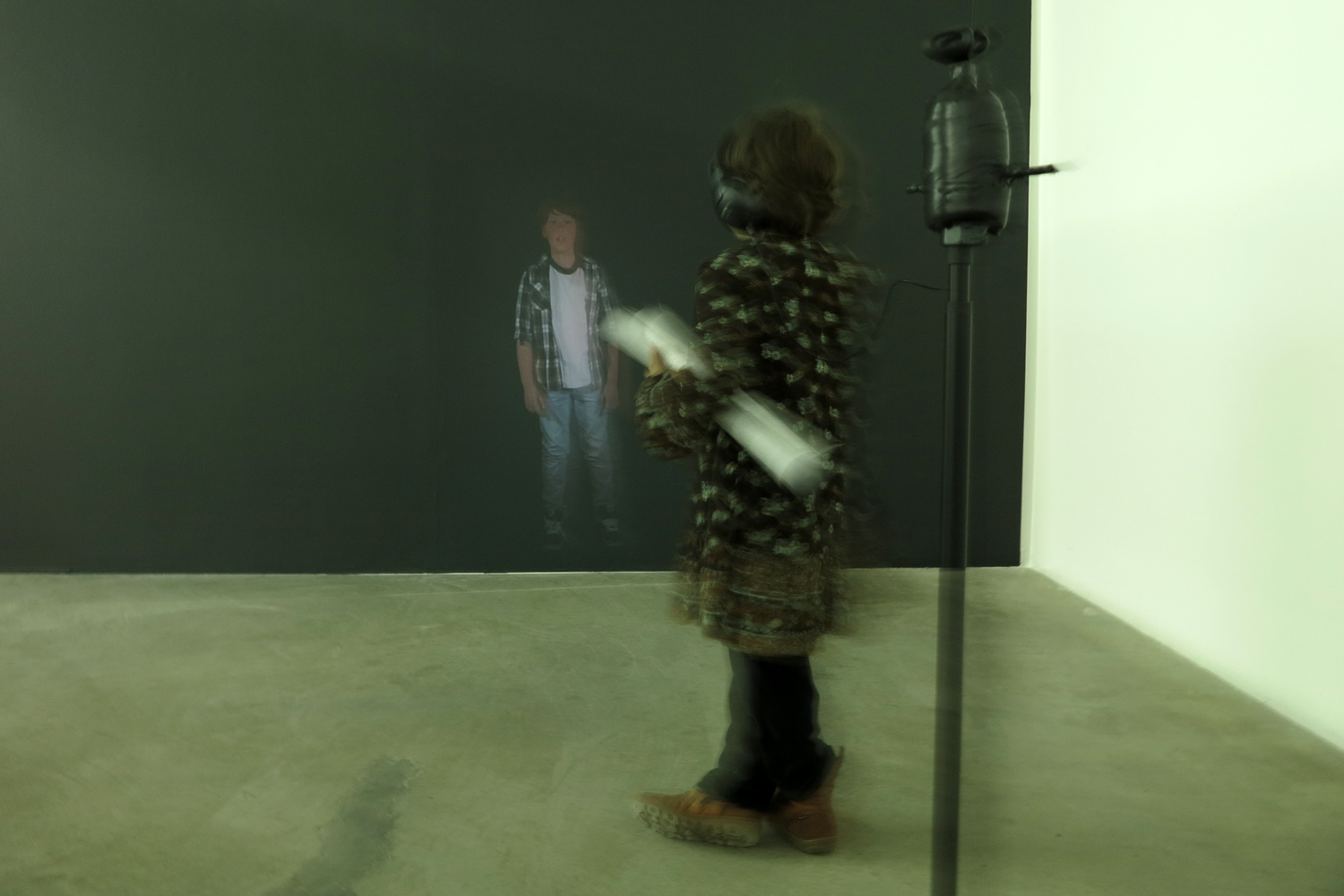 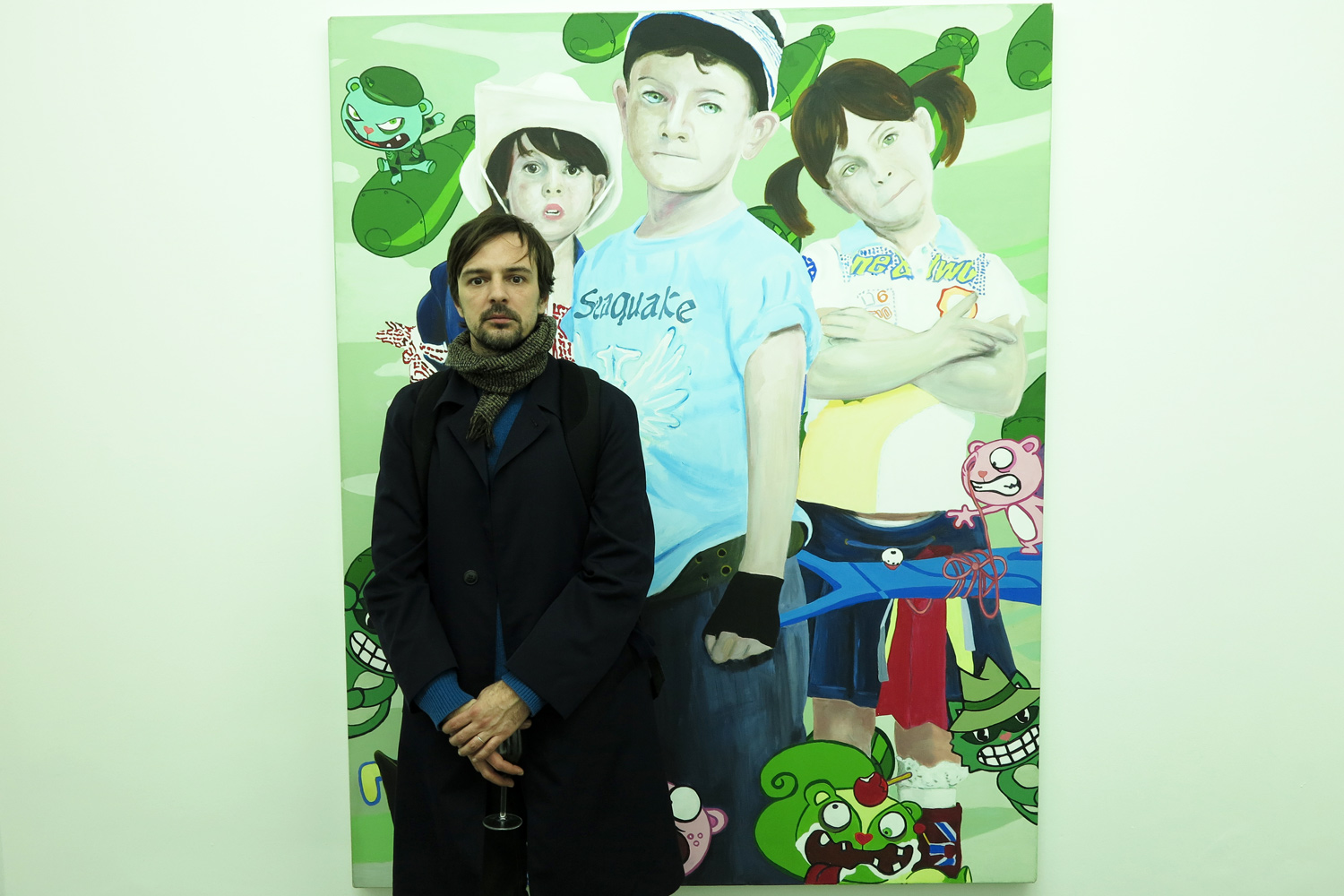 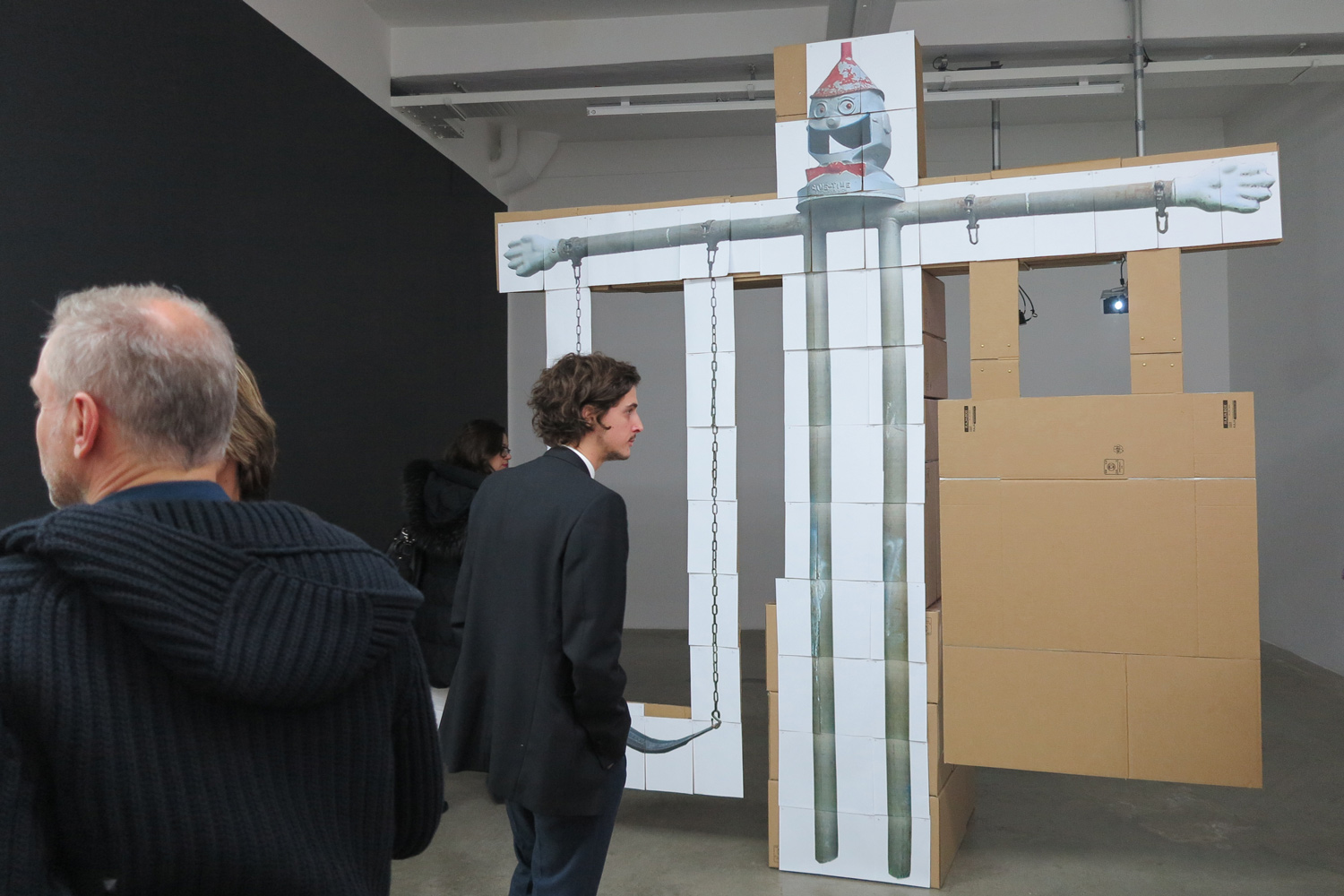 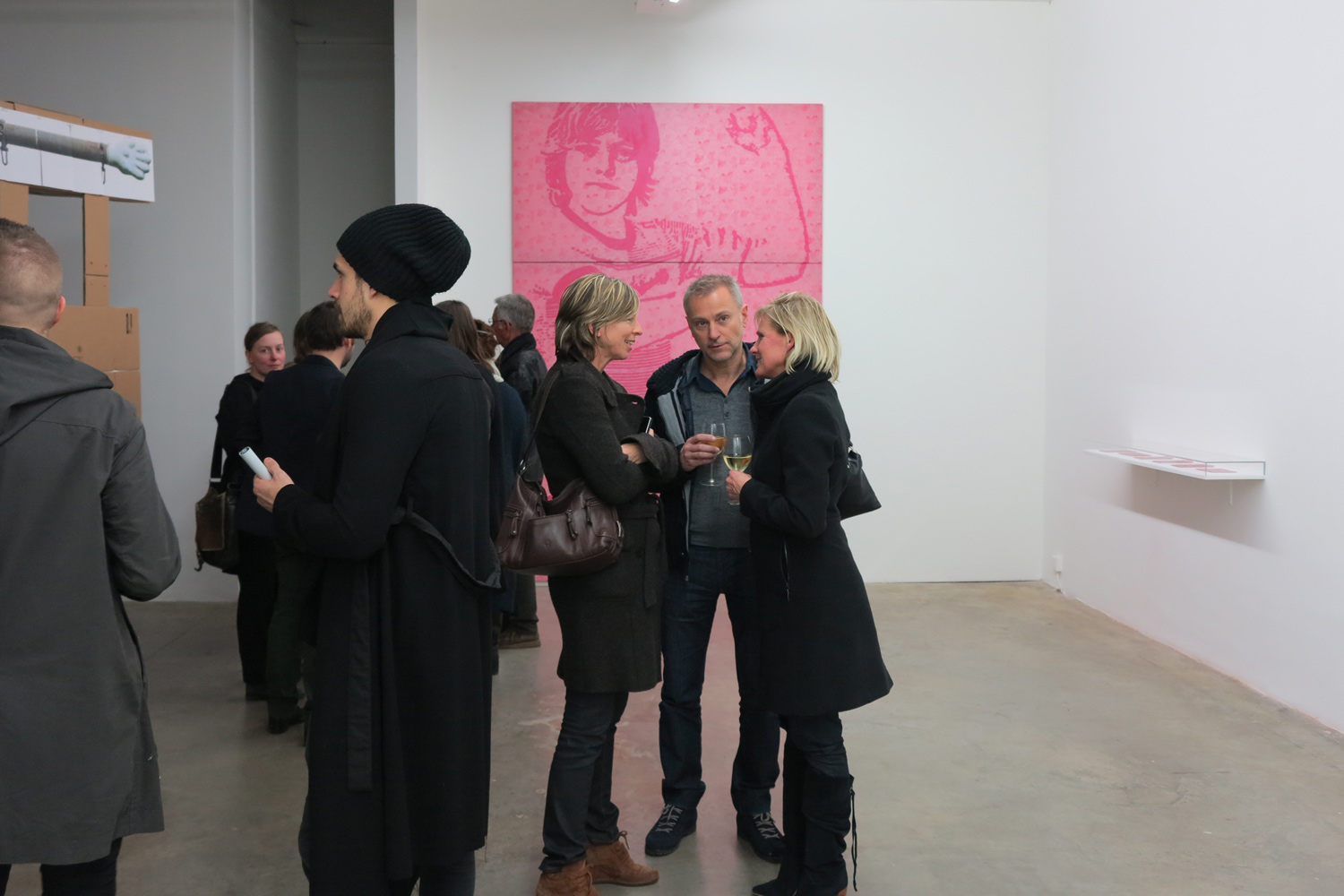 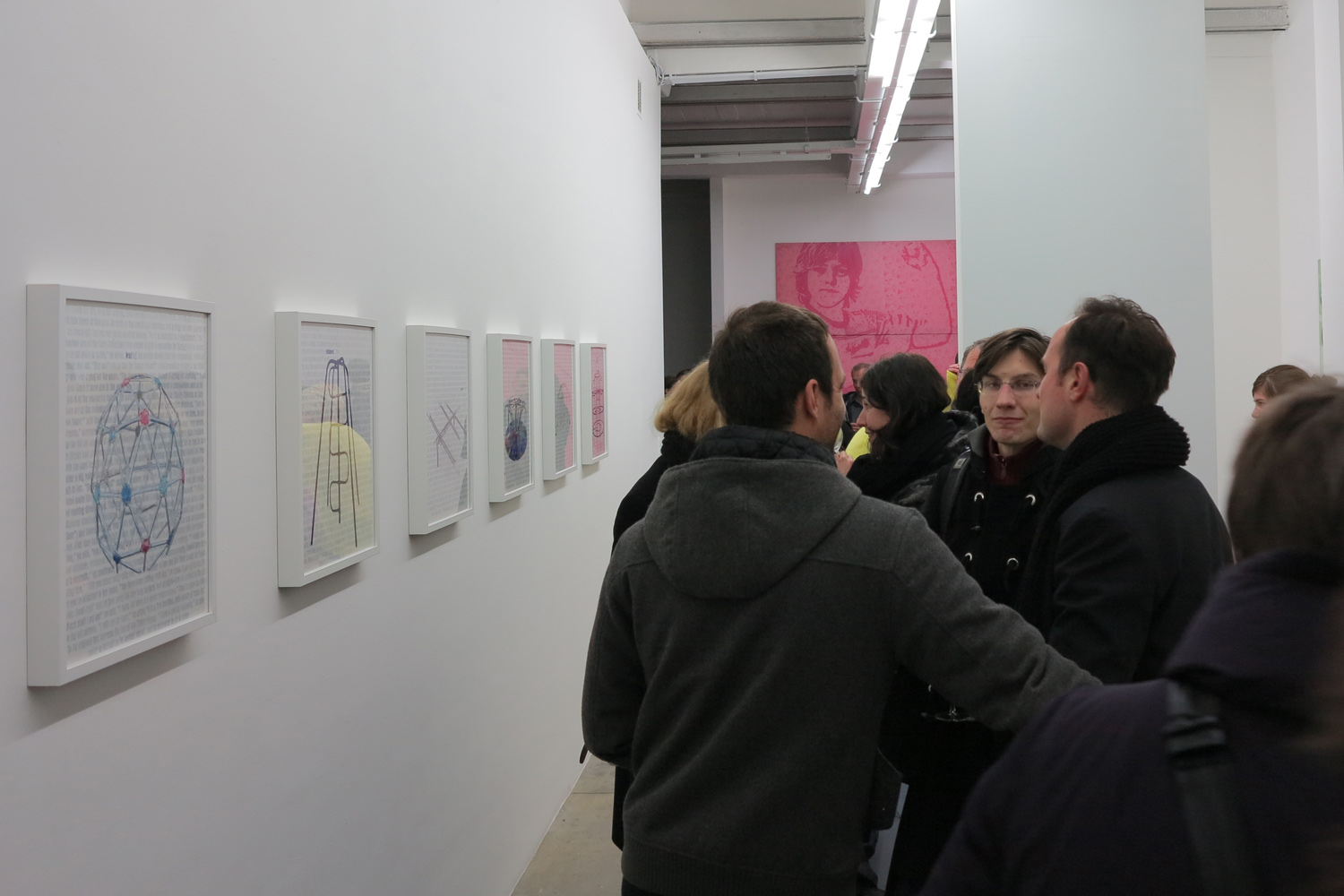 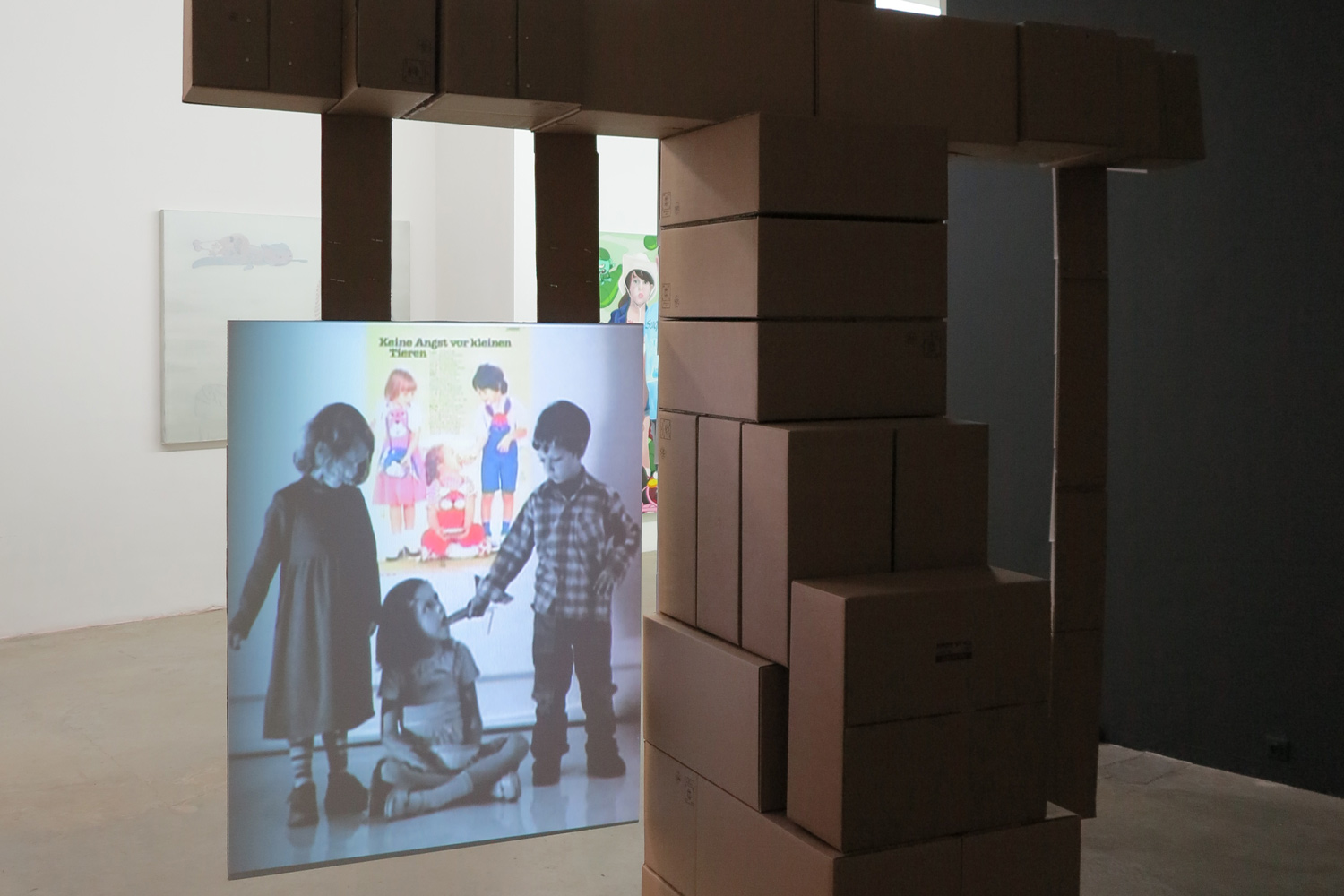 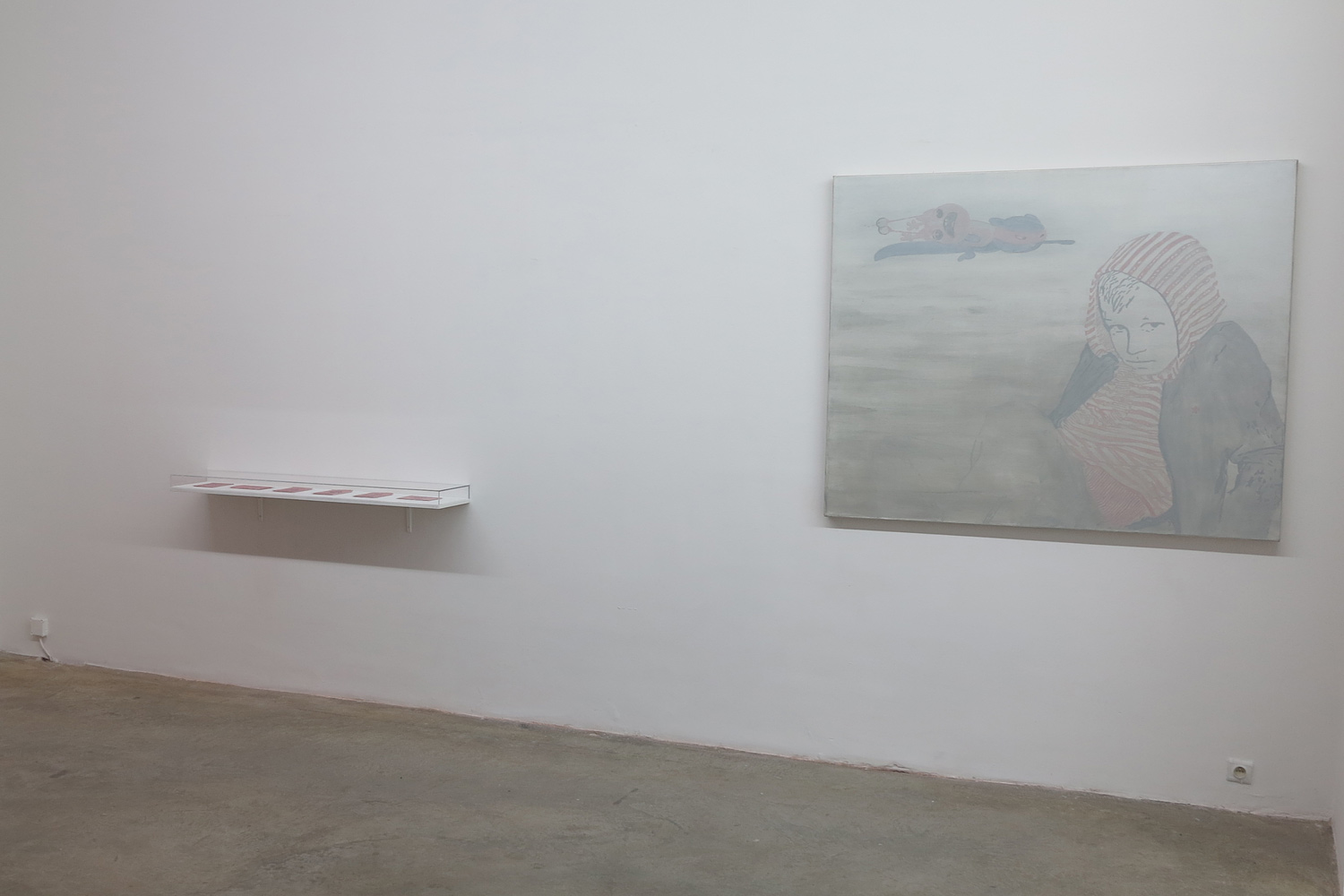 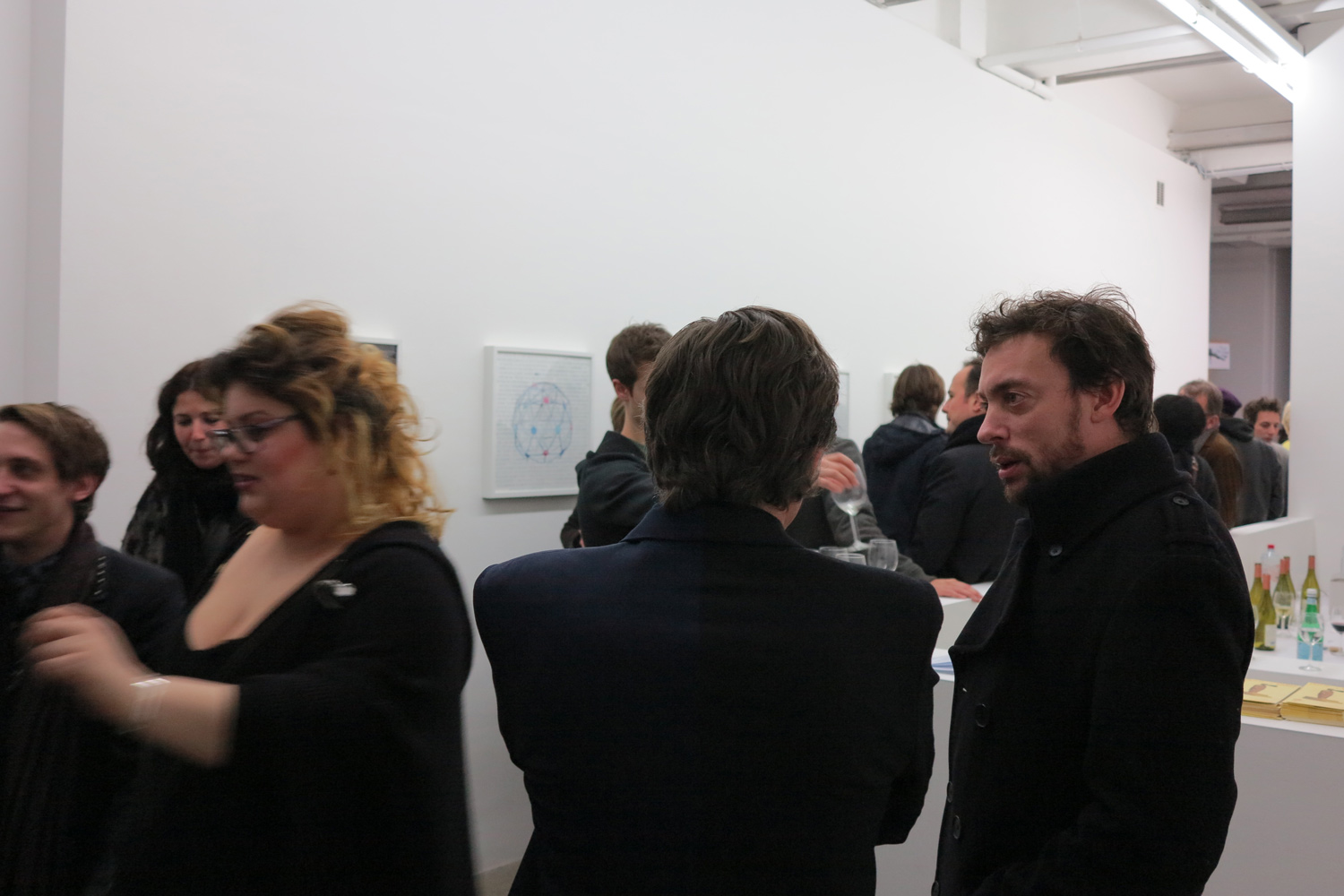 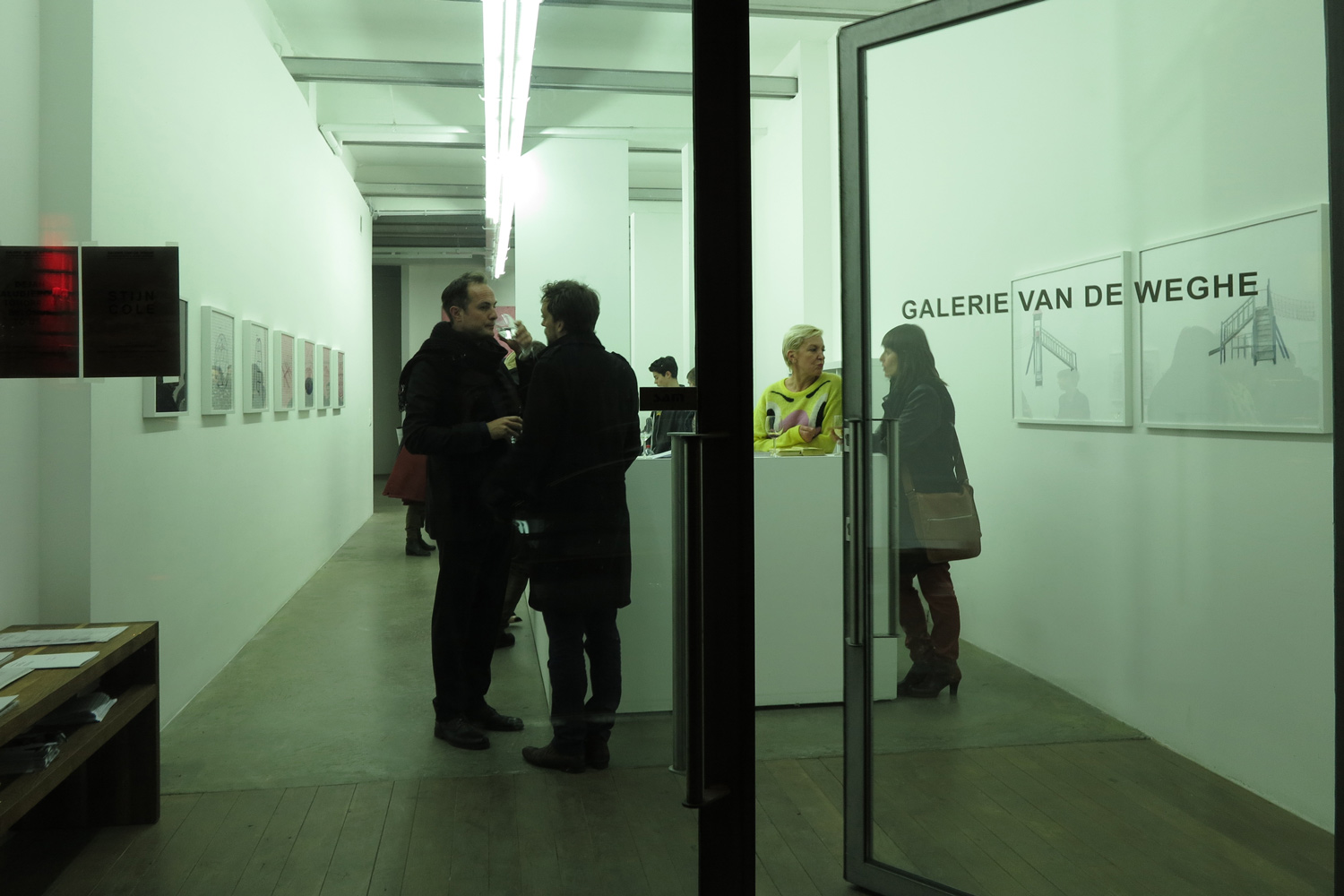 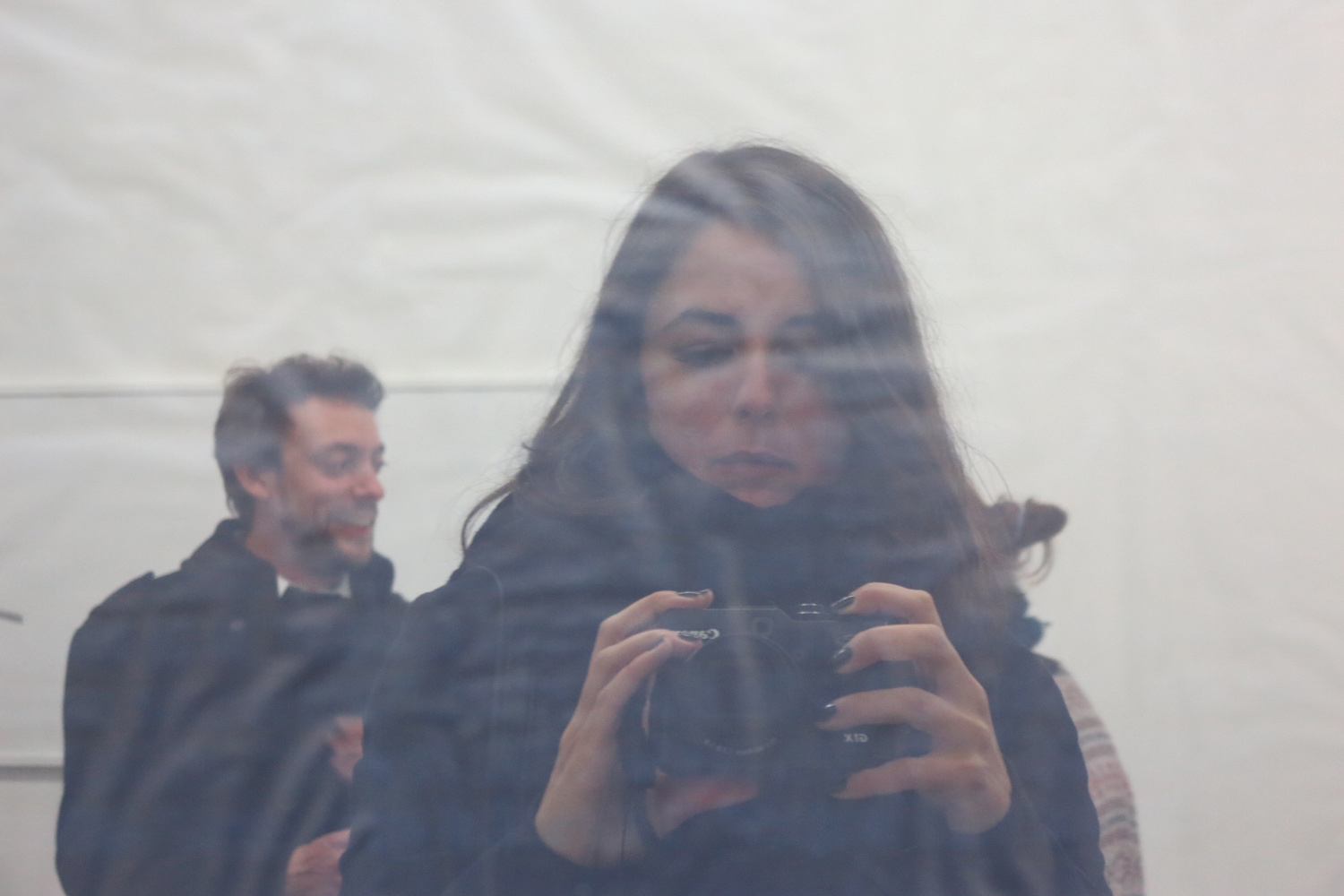 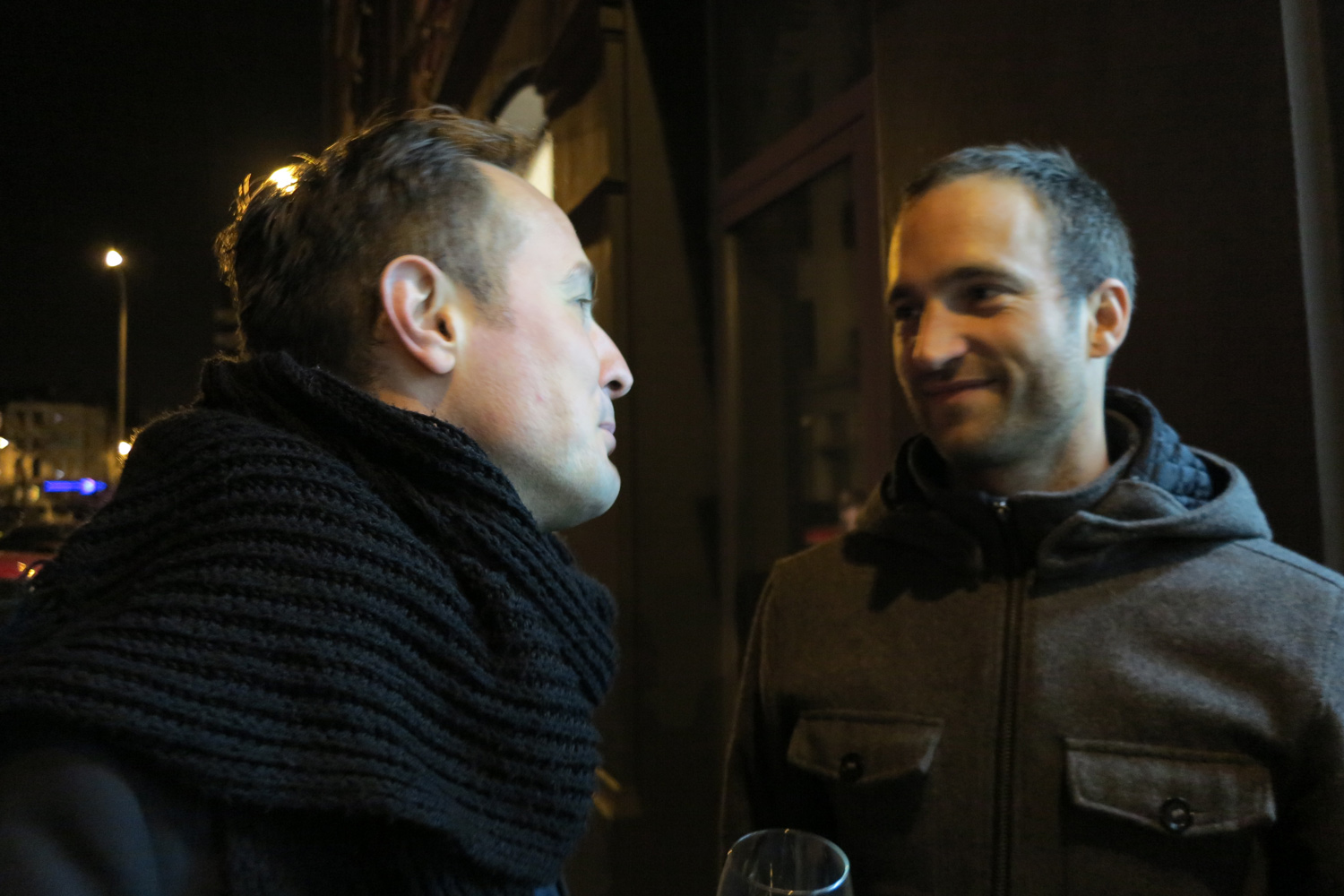 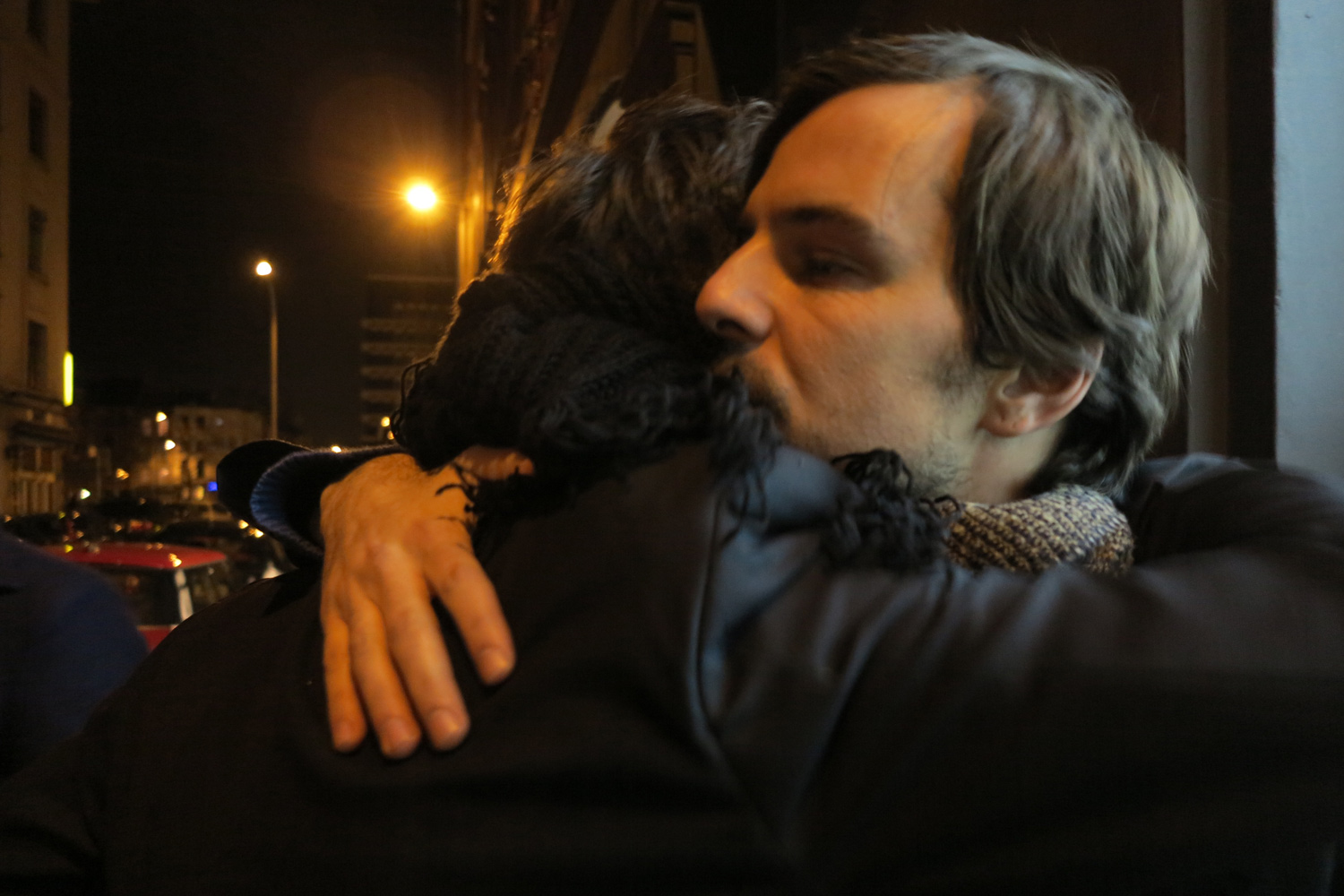 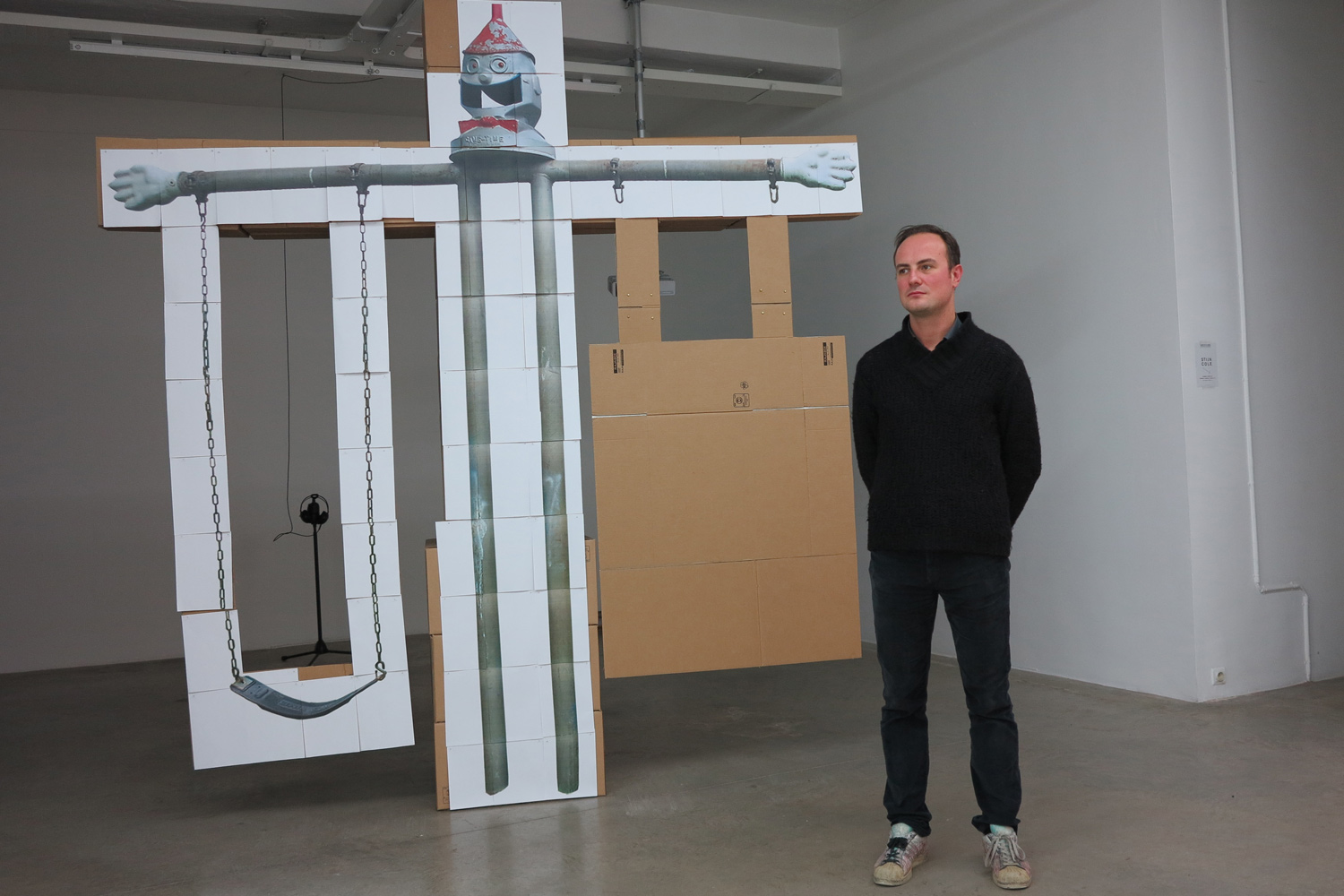 What Did Tomorrow Bring Us? Galerie Van De Weghe, Antwerp (2013)

“For his first solo exhibition in Belgium, Kaludjerovicć has produced an installation that immerses an image of L. Frank Baum’s, Tin Man, from the Wonderful Wizard of Oz (1900), with a children’s swing. In the manner of his previous projects, this piece too reflects the artist’s inquiry into (in)stability, that is, the truth of representational forms. This installation with two arm-like beams, bearing a swing on one, and a video on the other, has the head of the frightening, although smiling, face of the Baum’s character. Initially associated with the carefree childhood (interpreted by way of the swing), this installation, upon secondary reading, evokes the sensation of the lack of self-confidence and instability, typical for all the characters of this novel – for Scarecrow and Cowardly Lion as much as for Tin Man himself.

This feeling is confirmed in the video Keine Angst vor kleinen Tieren (No Fear from Small Animals) from 2004, which is projected on a hanging panel and establishes a(n) (in)balance with the empty swing on the opposite side of the beam. In the video, almost in stillness, three kids are restaging the scene on a poster-advertisement for children’s garments, visible behind them. The poster bears the same title Keine Angst vor kleinen Tieren originally published in the German fashion magazine Burda, at the beginning of the 1980s. On this poster, three kids are dressed up in rabbit, cat and dog pattern rompers. A boy and a girl are standing, and the boy is pushing a carrot into the mouth of a second girl who is sitting between them. This scene, once accepted as an appropriate image of commodity, restaged in a contemporary context, reveals explicit sexual allusions. Keine Angst vor kleinen Tieren emphasizes the instability of representational forms, by setting free a potential truth hidden under cultural artefacts, thereby revealing politics and economic forces that had once established a social order. In other words, it shows how art participates in representation’s “submission of subjectivity” under modern structures of power (Foucault, 1998). In this regard, it is possible for us to conceive that power lies in the constructed symbolic order of the dominant ideologies, rather than in the representational form itself…[The] empty swing, hanging opposite the video, may suggest a signified place which appears as “the locus of power” that, according to Lefort, remains an empty space only to be temporarily occupied, in order to challenge and dislocate a dominant order symbolized here, by the video projected on the other side of the beam.” One question arises here: what is this empty place to be filed with?